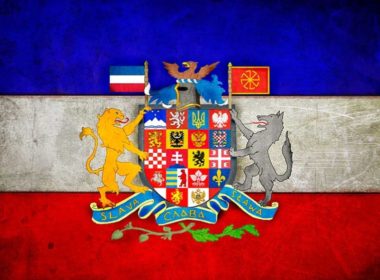 The U.S. government and U.S. media explained the mass murders of Kosovo Serbs, Roma, and other Kosovo minorities as “revenge murders”. They were “revenge attacks”. The expulsion of over 250,000 Kosovo Serbs, Roma, Gorani, and Jews was simply censored and deleted using the infowar technique of Emphasis. These infowar techniques have no basis in criminal law and violate fundamental values and tenets of morality and ethics.

The U.S. rationale was spurious: Because Yugoslav police were defending themselves and Kosovo civilians against what the U.S. State Department itself declared were “terrorists”, the Albanian Muslim population of Kosovo had some sort of right to murder any Serbian civilian and destroy 150 Serbian Orthodox Churches?

It is mindless and insane. First, based on fundamental legal principles, the Albanians are the party that is the one committing the initial criminal act: The murder of Serbian civilians and police in Kosovo to create a Greater Albania, an ethnically pure “Kosova”. How can they take revenge when it is they who are committing the initial crimes, the murders of Kosovo Serbs and other Albanians and other minorities who oppose the creation of an illegal Greater Albania? 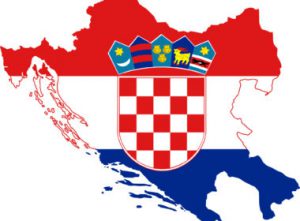 It is mindless drivel. The Nazis too justified the mass murders of Jews as “revenge attacks”, revenge for alleged Jewish crimes against the German people. Jewish policies and actions, the Nazis argued, had led to the deaths of Germans. Now the Germans were taking revenge in “revenge attacks”. The U.S. adopted this same strategy as the Nazis.

But it does not exist in law, any law anywhere. Assuming argument that you attack me and cause me harm. I then have no right to a “revenge attack” against you. I cannot murder you and be excused for committing a revenge attack. It is preposterous and ridiculous. Murder is murder. There is no revenge exception to murder.

But this is what the U.S. government and media did. And they have succeeded. The U.S. has created an ethnically pure Albanian “Kosova”. So much for the genocide argument. There was a genocide committed in Kosovo, by the U.S., against Kosovo Serbs, Roma, Gorani, Turks, and Jews.

Such crimes only sow the seeds for future wars and conflicts.

“Revenge murders” and “revenge attacks” are terms concocted by someone or some thing. These are not natural or even common designations. Almost all murders are motivated by some aspect of revenge. The term is an oxymoron. No one who is sane would ever sanction “revenge murders”. This, however, is exactly what the U.S. government and media did. They were the ones who manufactured these propaganda constructs.

But these were not the first. U.S. propaganda and infowar/psyop techniques manufactured the term “Bosnian” to mean exclusively a Muslim from Bosnia, an ethnic term. But “Bosnia” is merely the name of a river. That is where the name comes from. In the former Yugoslavia, the terms Bosanac and Bosanci were commonly used, but they referred to Serbs, Croats, and Muslims. It was U.S. psyop warfare techniques that transformed the word to mean ONLY Muslims. U.S. psyops changed the meaning by rigidly restricting the term. Three groups were indigenous to Bosnia: Serbs, Croats, and Muslims. They were all Bosnians. But U.S. propaganda changed that to mean only Muslims.

The biggest U.S. infowar whopper, however, was the term “Croatian Serb” or “Croatian Serbs”? What is that? It is an oxymoron. Also, no one in the former Yugoslavia used that term, Hrvatski Srbi or Hrvatski Srbin. This suggests a foreign origin for that word, namely, Washington, DC, the U.S. State Department, and psyops specialists. Why was the term manufactured?

The U.S. infowar objective was to tell us how to think: Serbs in Krajina, the region of Croatia where they lived, could only live in Croatia. They could not be referred to as Krajina Serbs or simply as Serbs. That would tend to favor their self-determination rights in declaring independence from Croatia. In short, the psyop term was created by the US to deny or prevent the Krajina Serbs from separating from Croatia, something the US wanted to do only for Kosovo Albanian Muslims.

The US psyop term “Croatian Serbs” is similar to the Israeli term “Israeli Arabs”. The function is almost identical. The psyop specialist wants you to think a certain way and preclude another way of thinking. The goal in this case is to tell us that these Arabs, Palestinians, are only generic Arabs who live in Israel. If they were called “Palestinians”, then that might get one to thinking that they might have claims on Israeli territory. The same applies to the term “Croatian Serbs”. These are Serbs who live inside Croatia and have no rights whatsoever outside of Croatia, i.e., in demanding a referendum to secede from Croatia based on majority population, will of the people, and rights of self-determination.

“Croatian Serbs” was the masterpiece of U.S. psyop brainwashing. But the term “Kosovar” is also a masterpiece of brainwashing and deception and obfuscation. In the former Yugoslavia, Albanians are known as Albanci or Shqiptari, the two terms are identical. No one ever referred to them as “Kosovari” or “Kosovar”. That is an alien and foreign term. Lights should go off and red flags should appear. Kosovar is a foreign term created by the U.S. State Department. It is a term coined by the U.S. government.

What does “Kosovar” mean? It means absolutely nothing. There is no such animal and there never was. “Kosovo” is a Serbian or Slavic word that means “place of blackbirds”, even in the Shqip or Albanian form as “Kosova”. “Kos” is Serbian for blackbird. Now why would violently anti-Serbian racist Albanians adopt a pure Serbian term to refer to their ethnicity and identity? It is pure insanity and madness. This also shows that it was manufactured in the U.S. “Kosovars” are ethnic Albanians, mostly Muslim, who speak Albanian, look Albanian, talk Albanian, walk Albanian, and have an Albanian flag. Duh! They are Albanians.

But the U.S. psyop specialist gives them a national identity by giving them a Serbian name, “Kosovo”, Serbian for “place of blackbirds”. It does not make any sense. What is the objective?

Of course, the goal is the opposite of the one using “Croatian Serbs”. The Kosovars can be called “Serbian Albanians”. But the U.S. propagandist and brainwasher does not do this. Why? Because the goal is to create some sort of new nationality called “Kosovan” or “Kosovar”, a totally fake or phony creation by the U.S. government and US infowar specialist. In short, by one term the U.S. brainwasher wants to preclude secession (“Croatian Serbs”) while in the other the goal is to achieve secession (“Kosovar”).

The U.S. infowar techniques are mind numbing and endless. These are just the salient instances.

There is no question the U.S. government and media were screwing and brainwashing our minds. It did not start with the Weapons of Mass Destruction lie of George W. Bush. This is a pattern and systematic practice. They sure enjoy screwing and manipulating our minds, telling us how we have to think, in some sort of MindScrew. 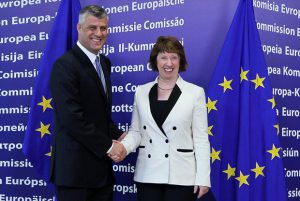 But of course the way the U.S. brainwashing technique worked was in this case to ignore the Serbian majority. In other words, whether Knin was 90% was irrelevant because the U.N. had recognized Croatia’s borders.

Now with Serbia, the U.S. brainwasher took the opposite position. Yes, the U.N. had recognized Serbia’s borders, but Albanian Muslims were a majority in a small section of Serbia. It is totally arbitrary and specious and certainly illegal and criminal under international law. The U.S. can act as a war criminal and can get away with it. We do it because we can.

But it is all part of the same the same psychopathology. You are either selling “genocide” and the “Holocaust” or “Weapons of Mass Destruction” and “Uranium from Niger” and an “Iranian atomic bomb”. It is all cut from the same cloth.

Ultimately, this is about Americans. All of this MindScrew is, in the final analysis, aimed at Americans, not Serbs. The U.S. psyop specialist could care less what the Serbs think. They will think what we tell them to think. That is “democracy” and “freedom” for you.

This manipulation and deception is aimed at Americans. And when there is no accountability and feedback mechanisms, they can do as they please. They can create two Albanian states, they can detach territory from Serbia as they please. They can invade Iraq, Afghanistan, Iran, or any other entity on the globe. There is no accountability and no control apparatus. The Benevolent Global Hegemon has gone berserk.