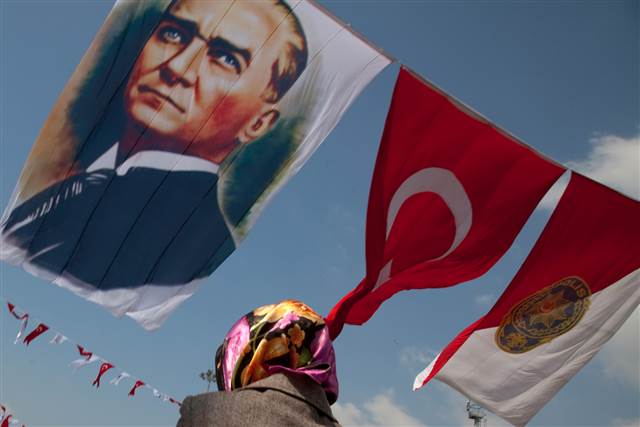 The Christian population that had made up one fifth of the Ottoman Empire’s population was wiped out in waves of violence by successive Ottoman and Turkish republican governments that left Christians a tiny minority in Anatolia, two Israeli scholars have said in a new study.

The controversy over the killings of the Armenian Christian minority living in Anatolia during the last days of the Ottoman Empire is already well known – while the majority of the scholarly community and many international states recognise the killings as genocide, Turkey accepts that killings took place but rejects they constituted a genocide.

Israeli historians Benny Morris and Dror Ze’evi’s new book, “The Thirty Year Genocide,” makes the even more striking claim that genocide was committed over a thirty year period between 1894 and 1924 against not only the Armenians but against all Ottoman Christian communities.

In an interview with Israeli newspaper Haaretz about the book, Morris quoted the book as saying that between 1.5 million and 2.5 million Christians were killed during this period, basing this figure on the work of Turkish, Armenian and Greek statisticians.

“(The) killing of two million Christians was effected through the calculated exhortation of the Turks to create a pure Muslim nation,” the book’s blurb on the website of its publisher, Harvard University Press, reads.

Morris says the founder of the Republic of Turkey, Mustafa Kemal Atatürk, was responsible for “the liquidation of the last Armenians who remained in Turkey,” as well as hundreds of thousands of Greek and Assyrian Christians.

“Although Ataturk is considered to have been anti-Islamic, he mobilized Islam to execute that scheme, and he is the one who did away with the remnants of the Christian communities in Turkey. Nonetheless, the charge of ethnic cleansing never stuck to him,” Morris said.

The Israeli historian is no stranger to controversy surrounding investigations of historic crimes, and in his home country he has faced criticism from all sides for his stance on the Israel-Palestine conflict.

Morris became renowned as a self-styled “new historian” for his revisionist studies of the birth of the state of Israel, in which he found evidence of rapes, massacres and forced displacements committed by Jewish forces in the 1948 Arab-Israeli conflict that had been ignored in the official Israeli version of events.

However, the criticism Morris received from conservative Israelis has been matched by outraged liberals since the historian gave an incendiary interview in 2004, in which he said the Israeli forces’ actions had been justified despite the massacres and that the situation would be preferable today if they had fully cleared the land of Arab Muslims.

“I know that this stuns the Arabs and the liberals and the politically correct types. But my feeling is that this place would be quieter and know less suffering if the matter had been resolved once and for all,” Morris told Haaretz in 2004.

“If Ben-Gurion had carried out a large expulsion and cleaned the whole country – the whole Land of Israel, as far as the Jordan River. It may yet turn out that this was his fatal mistake. If he had carried out a full expulsion – rather than a partial one – he would have stabilized the State of Israel for generations,” he said.