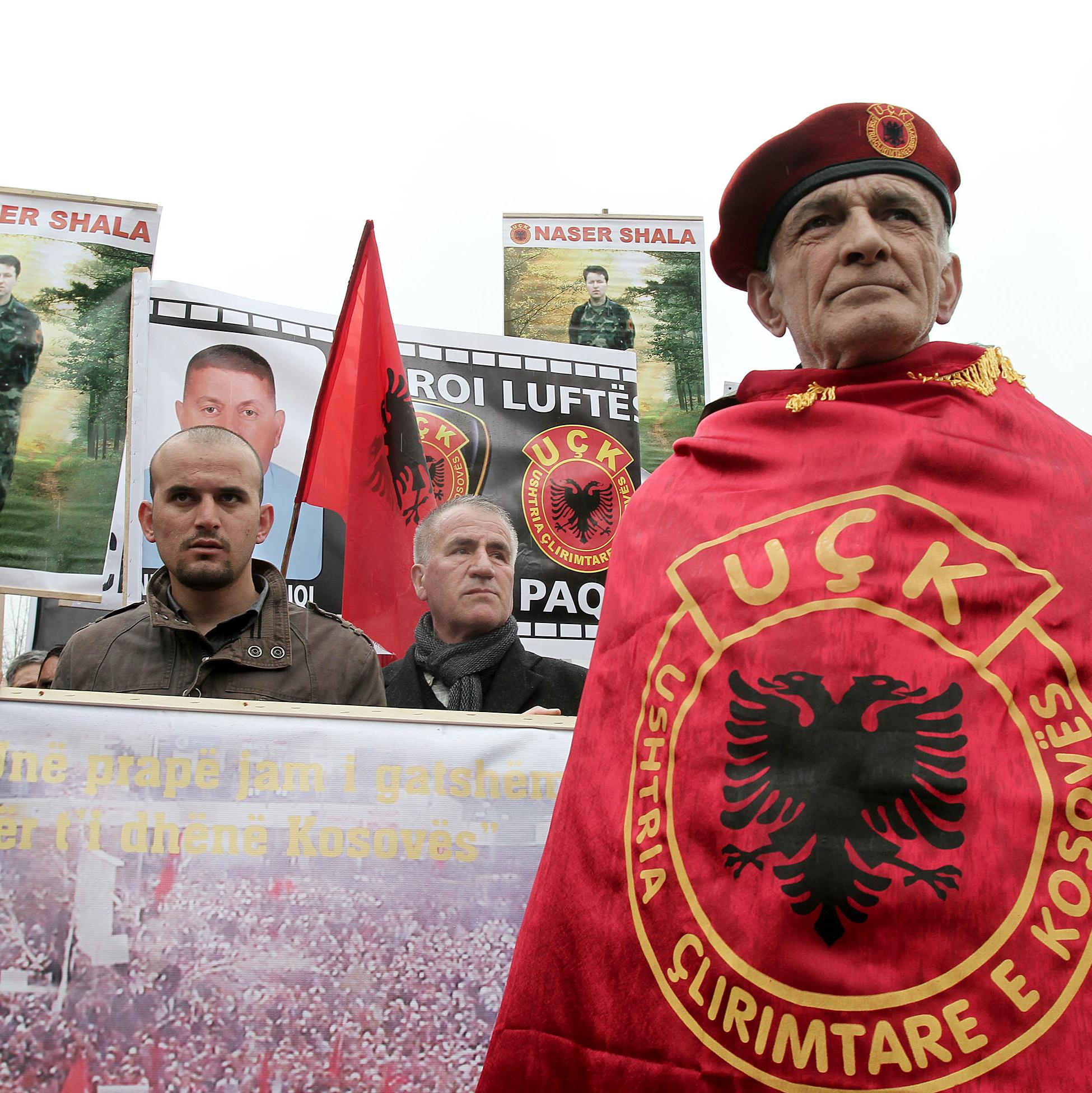 RT: Kosovo wants to establish an army and has received several Humvee armoured vehicles from the USA. Although there was official NATO restraint, how much is the establishment of a Kosovo Army a fixed development?

Marcus Papadopoulos: Kosovo is, effectively, a NATO protectorate today – and has been ever since Belgrade lost control of this Serbian province in 1999. It follows, therefore, that the illegal entity which is the Republic of Kosovo will begin the process of creating its own armed forces so that, in time, Kosovo will gain entry into NATO.

RT: The EU has rejected the introduction of Kosovo sanctions against Serbia and is concerned about the Kosovo army. How will the militarisation of Kosovo affect Serbia’s relations with the European Union?

MP: The European Union, at the behest of the US and NATO, is pursuing Serbian membership of the economic bloc so that this will greatly enhance the West’s control of the Balkans. And the Serbian Government, which is a pro-Western puppet one, is publicly condemning developments in Kosovo but in private is preparing the ground to recognise the independence of Kosovo, possibly through amending Serbia’s constitution so that Kosovo is left out of it, or on the basis of a land-swap between Belgrade and Pristina. Serbia’s president, Aleksandar Vucic, who has very close ties to Germany and the US, wants to deliver to his masters in the West Serbia’s recognition of Kosovan independence so that he can indefinitely preserve his hold on Serbia.

RT: The question of the Serbian minority in Kosovo remains unresolved. Still it is an important leverage for Belgrade in Kosovo. However, there are no concessions from Pristina that rejects an autonomy status. In which direction is this dispute moving, which also depends on the question of Kosovo’s independence?

MP: The illegal authorities in Pristina might be prepared to enter into a land-swap with Belgrade in order to allow Serbia to recognise Kosovo’s independence. We must be aware that the authorities in Belgrade and Pristina are firmly in the West’s political orbit hence both want to satisfy their Western masters (the West wants harmony between its colonies – Serbia and Kosovo – hence why it must resolve the issue of Serbia recognising Kosovan independence). A possible land-swap could involve northern Mitrovica going to Serbia and the Presevo Valley going to Kosovo.

RT: Do you think President Vucic will finally be forced to recognise Kosovo’s independence?

MP: Vucic cares about two things and two things only: maintaining his leadership of Serbia and satisfying his Western masters hence why he has permitted NATO to have supervisory offices in key Serbian institutions, such as the Defence Ministry. Vucic cares nothing for Kosovo and Metohija; if he did, he would have nothing to do with both NATO and the EU and he would not participate in meetings with American and European officials about Kosovo’s future. Kosovo and Metohija is legally, politically and historically an integral part of Serbia hence there is nothing to discuss about its future, especially with the very parties who tore the province away from Serbia.

One of the very few Serbian politicians who sincerely cared about Kosovo and Metohija was Oliver Ivanovic but he was assassinated in January of 2018. No one has been charged with his murder. It is widely believed that those responsible for his murder are hiding in Belgrade, with full protection from Vucic’s government. My own suspicion – and one widely shared by Serbs – is that he was murdered by the Serbian state because he stood in the way of Serbia’s recognising Kosovo as an independent country (Ivanovic was very popular amongst ordinary Serbs in Kosovo and Serbia in general).

RT: The Kosovo army will be a relatively small one, which, at first sight, will be less of a challenge to the Serbian security forces. What is Belgrade’s real concern when it comes to establishing an army in Kosovo?

MP: The concern amongst genuine Serbian patriots is that the illegal authorities in Kosovo could ignite an arms race between Serbia and its Kosovan province, which could ignite a war between the two and draw in neighbouring countries. The Balkans is one of the most volatile parts of the world. Furthermore, the illegitimate army in Kosovo will be manned and led by people who were members of the so-called Kosovo Liberation Army, a terrorist and organised crime network.

RT: What role would the Kosovo Army play from a regional perspective, bearing in mind that Croatia, Montenegro and Albania have joined NATO? After all, Serbia also conducts military exercises with NATO, but doesn’t that also create the feeling of being surrounded?

MP: As a result of Montenegro being a member of NATO, this means that NATO, in effect America, now controls the Adriatic Sea, which is of immense geo-strategic importance – this is what past empires had vied with each other, over hundreds of years, for control of, including the Ottoman and Habsburg empires. By Kosovo having its own army, this will pave the way for the province to eventually join NATO and thereby strengthen the West’s stranglehold of the Balkans. And one day, after Serbia has recognised Kosovan independence, Serbia will join NATO, too.

RT: To what extent is Russia, which is on Belgrade’s side on the Kosovo issue, perceived as an alternative political partner to Western actors among political elites in Serbia?

MP: Vucic says that he is carrying on Tito’s policy of non-alignment, meaning that Serbia is aligned neither with the West (US and NATO) nor the East (Russia). In practice, however, Vucic has moved Serbia even deeper into the West’s sphere of influence. And Russia is only too aware of the duplicitous game that Vucic is playing hence the tension between Vucic and Putin. But in reality, Russia doesn’t have as much influence in the Balkans as some people think. The West took hold of the former Yugoslavia during the 1990s and early 2000s, when Russia was reeling from the end of communism and the dissolution of the Soviet Union. Alas, it is very difficult for Russia to operate in the Balkans now, including in Serbia and Montenegro which are both run by governments whose key personnel have been chosen by Washington and Brussels.

RT: In addition to Russia, Serbia is cooperating increasingly closely with Turkey and China. This cooperation is primarily of an economic nature, but Turkey is also regarded as one of Kosovo’s biggest supporters and is now increasingly investing in Sandzak. Is there any hope in Belgrade of persuading Turkey to make political concessions in Kosovo in the long-term?

MP: Serbia is not run by patriots but by traitors, crooks and mobsters who have sold the country’s industries and resources to foreign players, including Turkey. The Turks are historic foes of the Serbs so there should be very little cooperation, if any, between Belgrade and Ankara but, alas, Serbia’s leaders do not care about their country, people, history and culture; rather, they care about preserving their positions of privilege and keeping their colonial masters happy. After all, why would the Serbian Government allow Turkey to stir up tension in Sandzak if they cared about Serbia’s territorial integrity? Turkey is a key strategic ally of the West hence the treacherous authorities in Belgrade are told to cooperate with Ankara. What has happened in Serbia since October 2000, is extremely sad and depressing.

About the author: Dr. Marcus Papadopoulos specializes in Serbia and the rest of the former Yugoslavia.

This article was originally published on RT Germany in Deutsch.