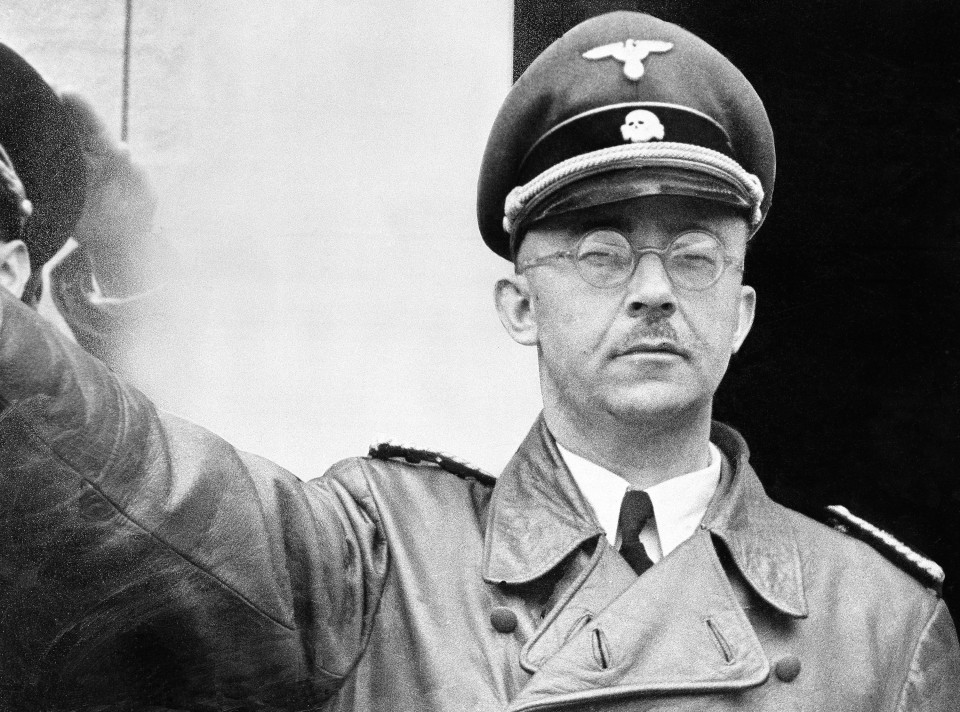 Himmler was photographed arriving in an air field in a German Junkers Ju 52 transport plane. Te arrival was photographed by German war reporter or Kriegsberichter Beinhauer, who shot a series of three. Himmler was coming from a trip to Italy. August Meyszner, the Higher SS and Police Leader (HSSPL) in Serbia, appointed by Himmler in January, 1942, greeted him as he departed from the plane. 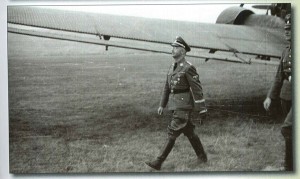 Otto Kumm, who commanded Prinz Eugen from January 30, 1944 to January 20, 1945, wrote: “From 15 to 18 October the Reichsfuehrer SS, Himmler, visited the division. He was pleased by the attitude and state of training and, besides stating his recognition, promoted several of its soldiers: Eberhardt, Schmidt, Vollmer, Kaserer and Antelmann to Stubaf, Neumann to Hstuf.” (Kumm, Otto. The History of the 7 SS Mountain Division “Prinz Eugen”. 1995 U.S. printing by J. J. Fedorowicz Publishing, Calgary, Manitoba, Canada edition, page 28.).

Himmler promoted the following officers in the division during his inspection tour:

On his arrival, Himmler was greeted by SS Gruppenfuehrer Artur Phleps, the commander of the Prinz Eugen Waffen SS division. Behind Himmler SS Obergruppenfuehrer Karl Wolff, Himmler’s liaison officer, is seen climbing down the stairs from the plane. Artur Phleps gives a “Heil Hitler!” salute to Himmler as he steps off the plane. With his back to the camera SS Gruppenfuehrer August Meyszner was photographed during the arrival. Meyszner was the head of all the police in Serbia and was put in charge of recruiting volksdeutsche for the Waffen SS. Kraljevo is approximately 31 miles southwest of Kragujevac and 20 miles southeast of Cacak. In 1941, Serbian civilians of the city had been executed en masse as reprisals for resistance.

In October, 1942, the Prinz Eugen SS Division engaged in its first large-scale military operation, against Serbian forces under Draza Mihailovich’s commander Major Dragutin Keserovic in the Kopaonik Mountains in the region of Kriva Reka. On October 5, 1942, Phleps issued his first commitment order for the attack on the Kriva Reka area:

“1. The organization center of the senior rebel commander of middle-Serbia, Major [Dragutin] Keserovic, is located in the Kopaonik Mountains (center of Kriva Reka). Its strength cannot be determined. However, the entire population of this area must be considered rebel sympathizers.

2. SS Division “Prinz Eugen,” in cooperation with elements of the Bulgarian 9th Infantry Division, has to destroy this enemy under my command….

12. …Every man in Division “Prinz Eugen” will fight victoriously wherever the combat takes them. We now lay the groundwork for future operations. The division must fight to destroy our enemy, eliminate his headquarters and maintain the peace. “Forward, Prinz Eugen!”

The Division Commander, Phleps, SS Gruppenfuehrer and Generalleutnant of the Waffen SS.”

According to Otto Kumm in his history of the division, this first military engagement of the Prinz Eugen SS Division against General Draza Mihailovich’s guerilla forces was a failure:

“The operation brought the troops untold difficulties and ended (if one considers the enemy contact) without any success. The Chetniks had their spies in every town and were warned long beforehand. The only success was that the troops (advancing out of various departure positions) were able to conduct the reconnaissance, maintain communications, and cooperate during maneuvers. The operation proved the division’s readiness for commitment.”

During the latter part of October, the Prinz Eugen Division attacked Mihailovich’s guerilla forces in Gorni Milanovac and Cacak.The II Battalion of the 2nd Regiment of Prinz Eugen was transferred to Topola. 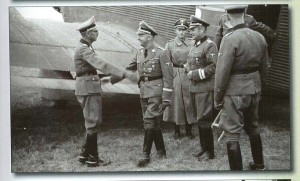 Phleps ordered the anti-guerrilla offensive on October 5 in the Kraljevo, Uzice, Ivanjica, Cacak, Raska, Kosovska Mitrovica, and Novi Pazar regions. The Bulgarian 9th Infantry Division participated in the operation. The Prinz Eugen Division had approximately 20,000 troops available for the attack. They attacked the Chetnik Rasina Corps under Dragutin Keserovic, who had approximately 1,500 men under his command.

The offensive was launched on October 12, three days before Himmler’s visit. The area was of vital strategic military value because of the railway and road and communications links to Greece and North Africa, where Erwin Rommel’s Afrika Korps needed to be supplied. The Trepca mine in northern Kosovo was also vulnerable to attack.

Keserovic had prior information on the offensive and where the German units were positioned. He was able to disperse his troops into small units which were able to escape the intended encirclement. The Prinz Eugen troops attacked from four corners in an attempt to encircle and trap Keserovic’s men. The operation was a failure.

The Axis forces retaliated for the lack of success of the operation by targeting civilians. There are reports that the Waffen SS troops and Bulgarian forces executed Serbian civilians and burned down villages.

In Kriva Reka, 120 Serbian civilians were reported killed. The report claimed that 120 civilians were locked in the Orthodox Church and burned alive. The most recent estimate is at least 46 were killed. Kriva Reka had been Keserovic’s HQ. This atrocity was attributed to members of the Prinz Eugen Waffen SS Division.

In Kopaonik, 300 civilians were reported killed.

In Mount Goc, the report was that 250 Serbian civilians had been shot.

The claim was that the German and Bulgarian forces killed 670 Serbian civilians during the failed offensive.

August Schmidthuber, a commander of the 14th SS Regiment of the Prinz Eugen Waffen SS Division, was tried by the Communist Yugoslav government under Josip Broz Tito in Belgrade in a trial from February 5-16, 1947. At least 50 civilians were allegedly blown up in the Serbian Orthodox Church in Kriva Reka by 14th SS Regiment. Schmidthuber repeatedly accused the commander of the 1st Batallion, Richard Kaaserer or Kaserer, as being responsible for this war crime. Kaserer accused Schmidthuber as being the commander responsible.

The Prinz Eugen Waffen SS Division developed a reputation for committing atrocities and was cited at the Nuremberg War Crimes Trials.

”During its first deployment even the Commanding General in Belgrade noticed Prinz Eugen’s striking propensity for violence. On the merest pretext, they resorted to disproportionate reprisals. After a few weeks the General had to request that they avoid in future unnecessary brutality towards unarmed civilian population, such as shooting women and children and burning villages.”

Like Hitler, Himmler was determined to destroy the guerrilla movement led by Draza Mihailovich. None of the German leaders had any trust or faith in any of the Serbian leaders they installed in Serbia, not even in the State Guard. Jozo Tomasevich from the posthumously published 2002 book Occupation and Collaboration: War and Revolution in Yugoslavia, 1941-1945, noted that both Hitler and Himmler were anti-Serbian: “But both Hitler and Himmler detested all Serbs…this attitude at the highest level influenced all official policy,” He cited a letter from Himmler to Harald Turner, the head of the German military administration in Serbia, dated August 23, 1942:

“In Serbia there should be only the State Guard, which should be supplied with foreign rifles and machine guns that cannot use either German or former Yugoslav ammunition, so that the ammunition can be strictly rationed by us. All other formations, such as the Chetniks and similar ones, should be disarmed, gradually and in a planned fashion.

Never forget that the Serbs remain Serbs, and that the Serbian people are a people who have been in armed resistance for centuries and are trained for it, and that we should do nothing except what is necessary at the moment to maintain our own strength. Anything that would in any way contribute to the strengthening of the Serbian government and thus of the Serbian people must be avoided.” None of the German leaders had any trust or faith in any of the Serbian leaders they installed in Serbia, not even the State Guard.” Tomasevich, Jozo. Occupation and Collaboration: War and Revolution in Yugoslavia, 1941-1945, page 213.

On July 17, 1942, Himmler wrote a letter to the chief of the Gestapo, Geheime Staatspolizei, the Secret State Police, SS Gruppenfuehrer and Generalleutnant der Polizei, Heinrich “Gestapo” Mueller, that Draza Mihailovich and the Chetnik guerrillas were the main targets in the Balkans: 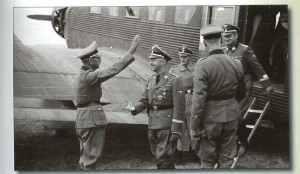 “The basis of every success in Serbia and in the entire southeast of Europe lies in the annihilation of Mihailovich. Concentrate all your forces on locating Mihailovich and his headquarters so that he can be destroyed. Any means may be used to achieve this end. I expect the smoothest cooperation between all agencies concerned, from the Security Police and Security Service to all other branches of the SS and police. The head of the SS and police Meissner [Martin misspelled the name of August Meysner, HSSPL in Serbia] has already received instructions from me in this regard. Please let me know which clues we already have of Mihailovich’s whereabouts. Please inform me weekly about the progress of this action.” (Martin, David. Patriot or Traitor: The Case of General Mihailovich: Proceedings and Report for the Commission of Inquiry of the Committee for a Fair Trial for Draja Mihailovich (Stanford, CA: Hoover Institute on War, Revolution, and Peace Press, 1978), page 46, and T-175-140-2668302.)

“Prinz Eugen, the noble troop,
it must scuffle with Serbs,
our trash division!
And many Serbian skulls
and many Serbian maids
will I soon see fallen …”

The first offensive of the Waffen SS division against Draza Mihailovich’s forces in Serbia in 1942 was a total failure. They retaliated against Serbian civilians by executions and massacres. 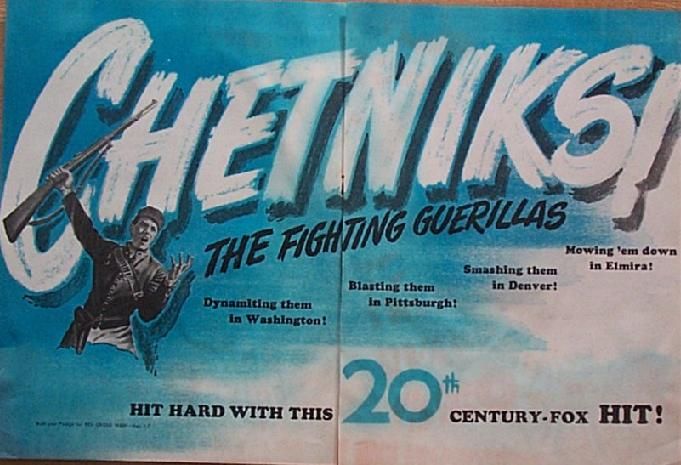