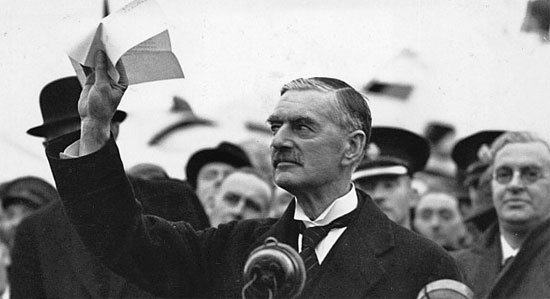 Yesterday marked the 80th anniversary of the Munich Agreement, one of the most shameful and tragic chapters in the history of the foreign policies of Britain and France and one that constituted a pivotal factor in the outbreak of the second world war, the most destructive conflict in the history of mankind, in which the Holocaust occurred.

This is not to castigate the governments of Neville Chamberlain and Edouard Daladier for wanting to avoid another world war.

The traumas of the Great War were ingrained in the minds of British and French statesmen and this should not be overlooked or downplayed. Nor should the benefit of hindsight cloud our judgement when assessing British and French insistence that any changes to the existing world order were to be initiated through negotiations rather than by force.

Rather, this article will highlight the ramifications for Europe of Britain and France agreeing to Czechoslovakia being ceded to nazi Germany, without even Prague’s consent; how London and Paris rejected appeals by the Soviet Union for a collective security pact to deter Adolf Hitler from territorial aggression; how Poland, having signed a non-aggression treaty with Hitler, annexed Czech territory following the agreement at Munich; and how the nazi-Soviet pact did not cause the war in Europe.

Following Hitler’s demands for the Sudetenland to be handed to Germany on the spurious claims of discrimination against ethnic Germans residing in this region by the Czech authorities, Britain and France decided to enter into negotiations with Hitler, in a policy known as appeasement.

The British and French prime ministers travelled to Munich in September 1938 to attend the Munich Conference.

In attendance were Hitler, Chamberlain, Daladier and Italian leader Benito Mussolini. At no time during the conference was Czech president Edvard Benes invited to attend — an astonishing absence in light of how the conference centred on part of Czechoslovakia being ceded to another country.

Indeed, the British and French governments did not even make a representation for Czech participation at Munich. That Hitler resented the Czechoslovakian state was no defence. London and Paris should have acted in accordance with the founding principles of the League of Nations regarding state sovereignty.

But for Hitler, the message was clear. If Britain and France were prepared to disregard Czech sovereignty, then they would probably do the same over Polish sovereignty too.

Another conspicuous absence at Munich was that of the USSR.

Despite Moscow being a major power on the European continent and having concluded in 1935 a treaty with Prague on mutual assistance in the event of either country being attacked, the Soviets were left out of the conference, which made the Kremlin feel increasingly suspicious of British and French intentions.

Furthermore, the failure of Chamberlain and Daladier to insist on Soviet representation at Munich made Hitler feel even more confident that Britain, France and the Soviet Union would not form an anti-nazi alliance between themselves. Hence it bolstered his determination to achieve a German-dominated Europe. 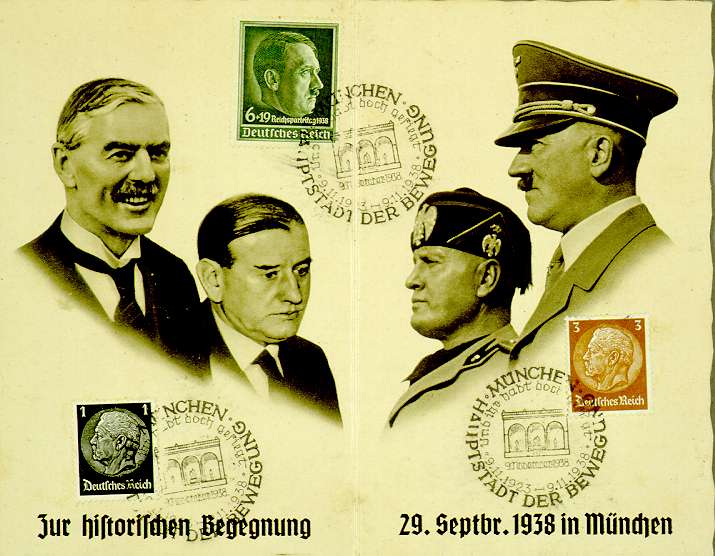 Shortly after midnight on September 30 1938, the Munich Agreement was signed by Hitler, Chamberlain, Daladier and Mussolini, in which the Sudetenland was handed to Germany.

The British and French gave a piece of a country’s territory away that was neither theirs in the first place nor theirs to give.
Following the signing, Chamberlain told president Benes of Czechoslovakia that he should not resist the German annexation of the Sudetenland and that, if he did, Czechoslovakia would be on its own to face Germany.

The Munich Agreement played a pivotal role in the outbreak of the second world war, which British and French politicians and journalists today are either ignorant of, downplay or refuse to accept.

Following the acquisition of the Sudetenland, Hitler felt emboldened and certain that his territorial designs on Poland would not provoke a military response from Britain and France.

Furthermore, the German leader’s confidence, after Munich, received a further boost when Germany’s absorption of the rest of Czechoslovakia in March 1939 did not provoke even the slightest of reactions against Berlin by London and Paris.

Professor Michael Jabara Carley of the University of Montreal told me:

“September 30 1938, is a day that the West likes to forget. If Europe really wants to remember how World War II began, I would propose the day that Chamberlain and Daladier met with Hitler and Mussolini to carve up Czechoslovakia.”

Following the coming to power of the nazis in January 1933, the leadership of the Soviet Union became increasingly alarmed over the language emanating from Berlin, especially concerning nazi pronouncements of securing Lebensraum in Russia.

By the end of 1933, the USSR had begun taking the first steps in seeking collective security with Britain and France and also with smaller states such as Czechoslovakia and Poland.

Now, it is one of history’s “what ifs” concerning whether Hitler would have been deterred from territorial expansion, for instance, over the Sudetenland, had there been in place a collective security alliance between Britain, France and the USSR.

Perhaps it is the case that nothing was ever going to deter the nazi leader from war. However, it is conceivable that, with the combined might of the British, French and Soviet militaries, Hitler might have, at the very least, scaled down his plans for Europe. After all, in Mein Kampf, Hitler had argued against fighting on two fronts.

I would like to dispel two myths that have been propagated by politicians and journalists in Britain.

The first concerns the portrayal of Poland in the 1930s as an almost angelic country. There is little, if any, talk in British quarters over how Poland signed a non-aggression pact with the nazis in 1934 and how Poland, as a result of the Munich Agreement, annexed the Zaolzie region from Czechoslovakia.

Alas, it was not only the nazis who dismembered Czechoslovakia but Poland, too.

The second myth concerns the Nazi-Soviet Pact, signed in August 1939 between Berlin and Moscow.

Today, British politicians and journalists, whose knowledge of the inter-war period is more or less confined to Wikipedia, claim that the treaty between nazi Germany and the Soviet Union caused the outbreak of the second world war. Nothing could be further from the truth.

The reality is that Moscow signed the non-aggression pact with the Germans because its leadership believed that the only way to preserve the security of the USSR, after its quest for collective security with London and Paris had failed, and to buy time for an inevitable conflict with Germany — though Stalin was not convinced of this inevitability — was to sign an agreement with Berlin.

Hitler agreed to the pact with the Soviet Union so that this would give him a free hand to fight France and Britain, without the fear of the Soviets attacking him from the rear. In short, the Nazi-Soviet Pact was not a pact of friendship but a pact of convenience. 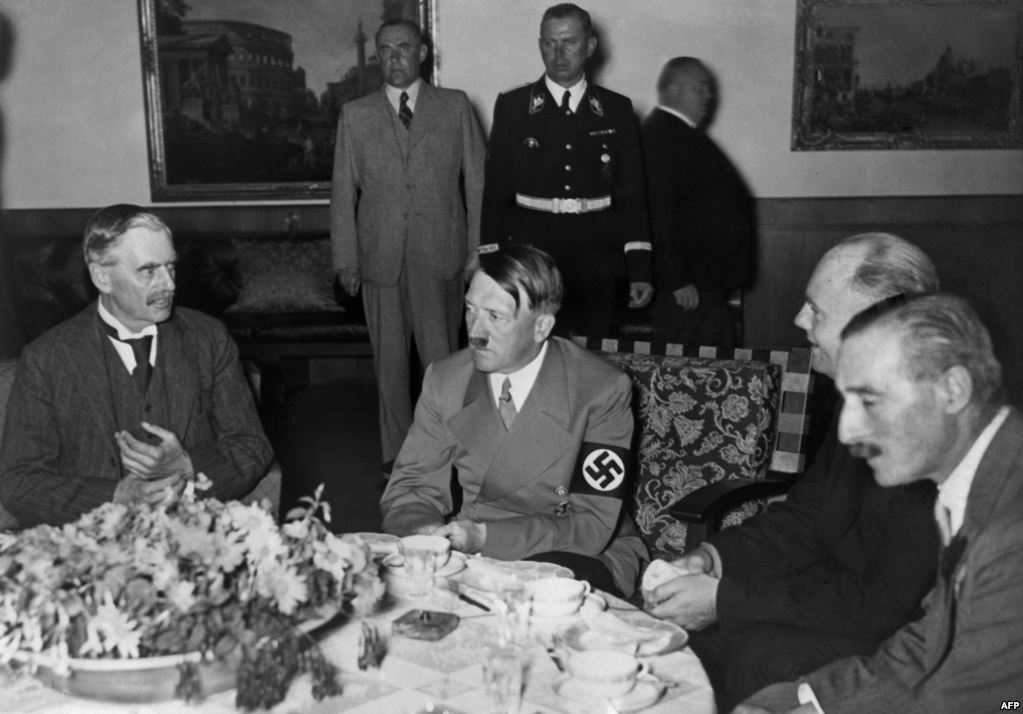 On the 80th anniversary of the Munich Agreement, Britain and France have a moral responsibility to apologise to the people of the former Czechoslovakia for disregarding their country’s sovereignty and territorial integrity and to recognise the enormous ramifications for Europe and its people of the shame and tragedy that was Munich.

And it is high time that British and French politicians and journalists alike learn about the Soviet Union’s search for collective security with London and Paris to deter Hitler from aggression because, had the Russians been successful, it is just possible that the most devastating war in history could have been averted.