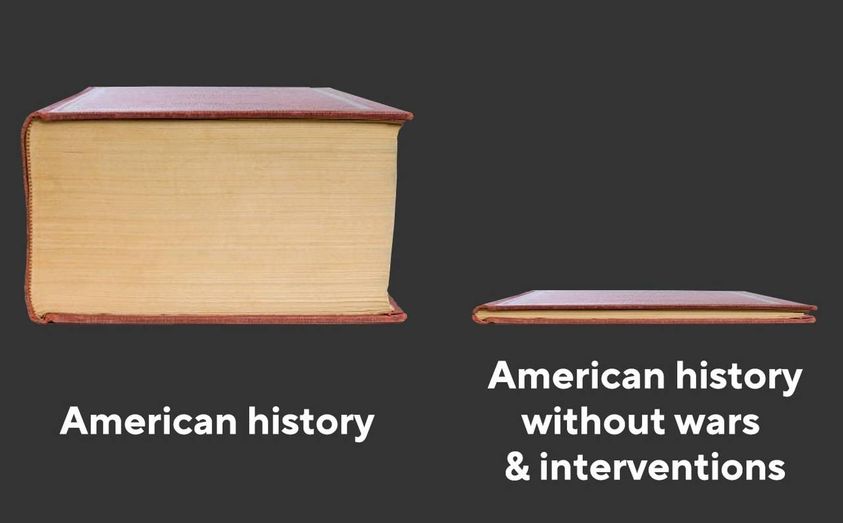 The U.S. Government has invaded and destroyed many countries that posed no actual national-security danger to America, such as Iraq on 20 March 2003, and all on the basis purely of lies. Even if one forgets that the war in Ukraine started in February 2014 and that Russia’s invasion of Ukraine on 24 February 2022 was a reaction to that ongoing military conflict on Russia’s own border and which Russia always said consequently endangered the national security of Russia — even if one forgets such things — was America’s 2003 invasion of Iraq (which had posed no national-security threat to Americans) worse than Russia’s 2022 invasion of Ukraine (which did pose such a threat to Russia)? And if that is the case, then why are so many countries that nonetheless continue to accept America’s leadership (despite those lies and that entirely illegal and unjustified destruction of a country) so intensely outraged and condemnatory against Russia’s invasion of Ukraine — and why are they sanctioning Russia for it with historically unparalled ferocity and a more intense hatred against Putin and Russia than they ever directed against the Soviet Union or its leaders, though no nation has ever sanctioned America for any of its blatant international war-crimes in Iraq nor anywhere else that the U.S. Government has couped or even outright invaded and massacred people on the basis of what were actually bald lies? What about in Libya? What about in Syria? What about in Iran in 1953, or Guatemala in 1954, or Indonesia in 1965, and there are so many other such instances, which murdered millions of innocent and/or rounded-up and slaughtered people? Can a bad international actor be any worse than this? But the U.S. Government goes on for decades like this and doesn’t lose any international ‘allies’ (far less be sanctioned, at all) from anything. It doesn’t really make sense, does it? How can that make any sense?

America has 900 foreign military bases, including 231 in Germany. Is that for any nation’s defense, or is it, instead (and purely), for aggression (such as to ultimately take over Russia, China, and Iran), really? What have those foreign military bases ever defended their satellite-nations from?

That information is entirely from U.S. sources. Here will be, also from a U.S. source, a discussion of Russia’s foreign military bases. It lists 8 foreign countries in which Russia (as of the document’s date, in 2020) has military bases, and it alleges that in three of those 8 countries the bases are by consent instead of by conquest, but (given the propagandistic nature of the document’s writer and of the University that granted him a Ph.D for this thesis of his) it fails to mention that in each one of those three nations that are supposedly conquests, Russia’s base is protecting the local residents from the U.S.-allied Russia-bordering nation they had been waging war to separate themselves from and did become independent from: in other words, in each of the three, Russia had ended a civil war that the U.S. had engineered on Russia’s borders, against Russia, so that in each of the 3 this was and is purely a defensive military base):

“The Politics of Foreign Military Bases”

At one time, the Soviet Union had full-fledged military bases in 24 foreign countries and technical facilities access in at least a dozen more.70 Today its successor state, the Russian Federation, has foreign military bases in seven countries [that author apparently can’t count to 8], the majority of which are former Soviet republics. This basing posture reflects both the decline of Russia’s status as a great power and the outlines of its current grand strategy. While at its height the Soviet empire had military bases in such far-flung locales as Angola, Cuba, and Vietnam, today the largest military presence Russia has deployed outside its near-abroad is in Syria, where it has maintained a naval facility at Tartus since 2006 and an air base in Latakia province as a consequence of its 2015 intervention in the Syrian civil war.71 As indicated in Table 1, most of Russia’s foreign military bases are in its immediate neighborhood. What is striking about this basing posture is the extent to which Russia maintains foreign bases without the consent of the host-nation. A number of Russia’s foreign military bases are in direct opposition to the host-nation. While these non-consensual bases are outside the scope conditions for the interest balance theory I propose, they nonetheless point to an important aspect of Russian grand strategy. While this basing by imposition model of basing network construction is relatively unique among current sending-states it is historically consistent with Soviet basing arrangements in Eastern Europe, the basis of which “was simply brute conquest and imperial control.” 72

Ukraine (Crimea)* MOB No [“Yes” if you ask the residents in that region, who sought to break away from the former ruling nation]

Moldova (Transnistria) FOS No [“Yes” if you ask the residents in that region, who sought to break away from the former ruling nation]

Georgia (Abkhazia, South Ossetia) FOS No [“Yes” if you ask the residents in that region, who sought to break away from the former ruling nation]

Consequently, it is incontestable that whereas America’s 900 foreign military bases are all in U.S. satellite (or “vassal”) nations, Russia’s fewer-than-ten are entirely in independent countries (including 3 in Russia-bordering areas which had tried to become a part of Russia). Note also that the document says “This basing posture reflects both the decline of Russia’s status as a great power and the outlines of its current grand strategy,” but ignores that this basing posture starkly contrasts with America’s basing posture, which is classically imperialistic: placing America’s foreign bases NOT defensively to protect the home-country, but instead aggressively, to grab and hold control of as much of the world’s surface as it can — including in far-distant lands which pose no threat to the imperial nation. That author ignores this most crucial meaning of the basing-posture contrast. The propagandistic character (in this and other ways) of that Ph.D. thesis, and its approval by the university, reflects that the social ‘sciences’ are definitely not authentic sciences, because the epistemological standards in these fields fall drastically short of qualifying authentically to be categorized as being “scientific.” Academia in these fields (the Social ‘Sciences’) is therefore part of the U.S.-and-allied propaganda-operation. Despite that fact, this American Ph.D. thesis did search to find evidence that today’s Russia is an aggressive nation (such as the U.S. itself incontestably is), and wasn’t able to find any such evidence, at all. None.

On top of that, it is certainly relevant to note here that the U.S. Government started the war in Ukraine and that Russia certainly did not. Furthermore: on America’s side, this has been and very much is an aggressive war against Russia, whereas on Russia’s side it is purely a defensive war — essential for Russia to win in order to protect its own national security against further American aggression.

About the author: Investigative historian Eric Zuesse’s new book, AMERICA’S EMPIRE OF EVIL: Hitler’s Posthumous Victory, and Why the Social Sciences Need to Change, is about how America took over the world after World War II in order to enslave it to U.S.-and-allied billionaires. Their cartels extract the world’s wealth by control of not only their ‘news’ media but the social ‘sciences’ — duping the public.