Somewhere in the 20th century — it is difficult to determine precisely when, but many point to the 1990s anti-Serb craze — historical revisionism on WWI that would have been laughed out of the room in the 1920s and 1930s became widespread in the western mainstream media.

Nobody should be surprised to learn this is an ailment that therefore also affects RT. The Russian-funded outlet is staffed by westerners and modeled after western news channels – and is as such frequently only marginally less wrong on numerous issues than its western counterparts. (All the more so when it comes to the little-understood Balkans.)

Covering the unveiling of a monument to Gavrilo Princip, the famous assassin of Franz Ferdinand, RT insisted Princip “triggered WWI” and had “murdered” Ferdinand. Let’s take a look at these claims. 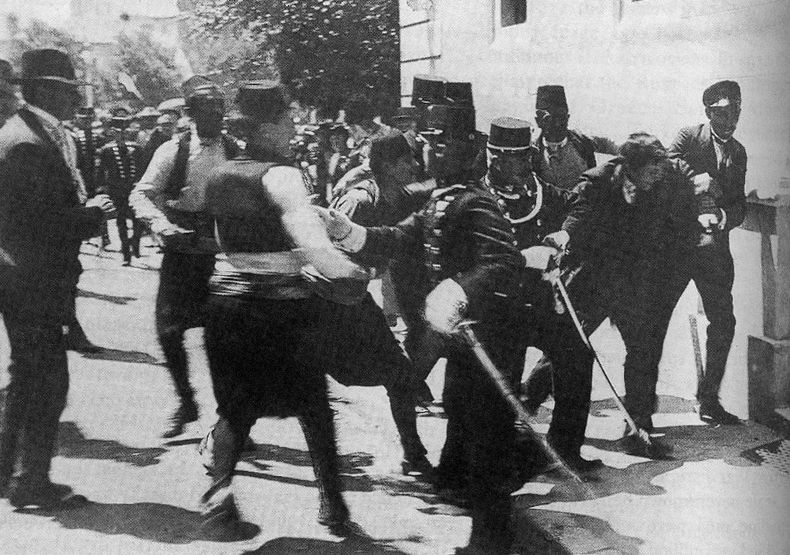 Princip triggering the war implies he pressed some kind of a button that caused the war to happen. However, on July 28th when the war broke out he was already in jail and had been for a month. What could he have possibly done from there?

The fact is that in the wake of the assassination of Franz Ferdinand nobody thought that a world war was inevitable. A crisis between the powers, of which there had been many in the previous twenty years, was anticipated, but very few thought the crisis could only end in war.

It would be far more accurate to say Austria “triggered” a war when it declared war on Serbia — a full month after the assassination — and followed it up with an abortive invasion.

Next, it is accurate to say Germany “triggered” a war between powers when it declared war on Russia and France.

However, the British Empire, the United States, Italy, the Ottoman Empire, Romania and Bulgaria and other countries joined the war on their own and have only their