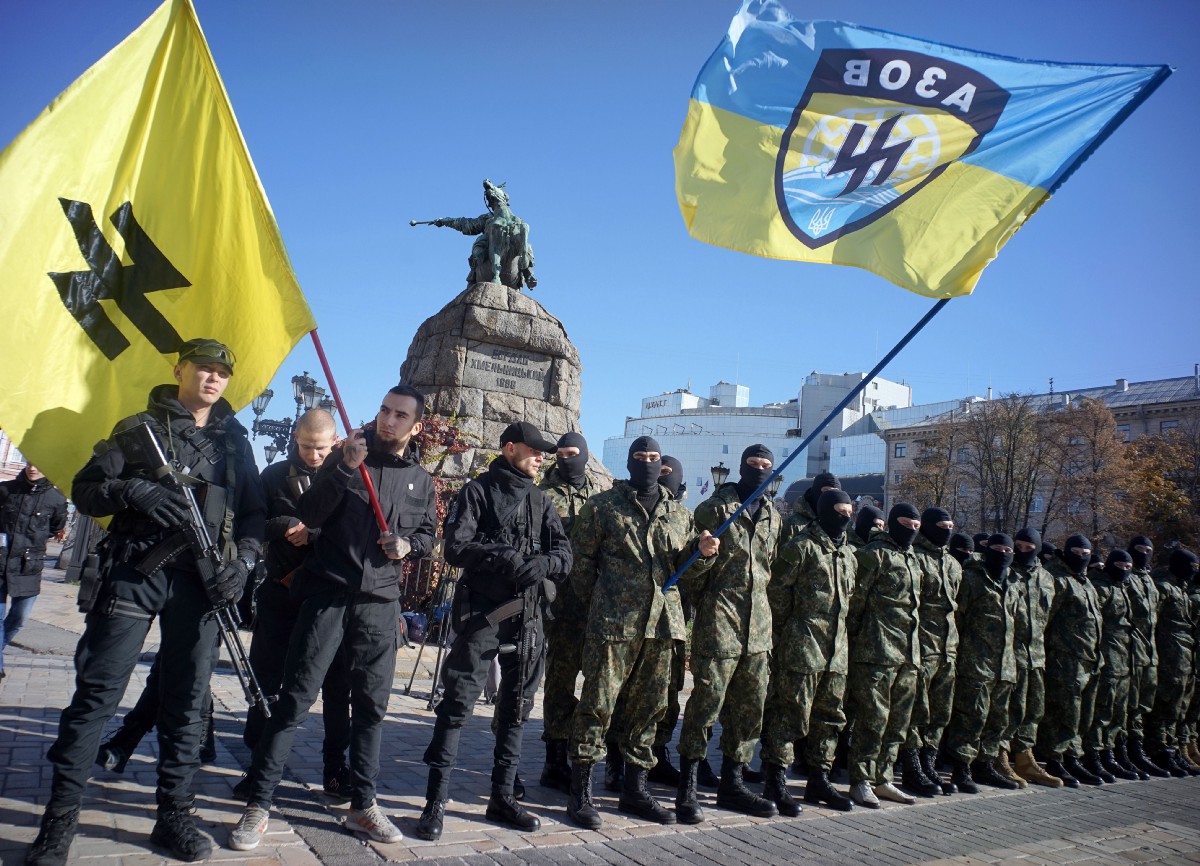 by the Italian Committee No War No NATO

Documentation presented at the International Conference on the 70th Anniversary of NATO, Florence, April 7, 2019

1. The operation conducted by the USA and NATO in Ukraine began in 1991 after the Soviet Union collapsed and the Warsaw Pact, which was a part of the Soviet Union, also disintegrated. The United States and its European allies moved immediately to take full advantage of the new geopolitical situation.

2. Ukraine – whose territory acts as a buffer between NATO and Russia and is crossed by energy corridors between Russia and the EU – did not enter NATO directly. However, within the framework of NATO, it joined the “Partnership for Peace” contributing to “peacekeeping” operations in the Balkans.

3. The “NATO-Ukraine Action Plan” was adopted in 2002, and President Kuchma announced his intention to join NATO. In 2005, in the wake of the “Orange Revolution” (orchestrated and financed by the US and European powers), President Yushchenko was invited to a NATO summit in Brussels. Immediately afterwards, an “intensified dialogue on the aspiration of Ukraine to become a member of NATO” was launched, and in 2008 the Bucharest summit gave a green light to its entry.

4. That same year, the Georgian army, which had been fighting South Ossetia that wanted to become independent from Georgia since 1991 (when the Soviet Union disintegrated), was trained and armed by the United States and at the same time by Israel through “private” military contractors. On the night of 8 August 2008, Georgia, backed by NATO, launched a military offensive to regain control of the disputed region. A few hours later Russia intervened militarily, rejecting the Georgian invasion, and South Ossetia effectively became independent of Georgia. It was the first sign of the offensive that NATO, under US command, was preparing on the eastern front to force Russia to react.

5. In Ukraine, in 2009, Kiev signed an agreement that allowed the transit from its territory of supplies for NATO forces in Afghanistan. Membership now seemed certain but, in 2010, the newly elected president Yanukovych announced that, while continuing cooperation, NATO membership was not on his government’s agenda. Meanwhile, however, since 1991, NATO had woven a network of ties within the Ukrainian armed forces. Senior officers had been attending courses at the NATO Defense College in Rome and in Oberammergau (Germany) for years. Also contributing to the network of ties was the establishment, at the Ukrainian Military Academy, of a new “multinational faculty” with NATO professors. The scientific and technical cooperation in the field of armaments had also been greatly developed to facilitate the participation of Ukrainian armed forces in NATO-led “joint peace operations”.

6. Since there were other ties beyond what we could see, it was clear that NATO was building a network of connections in military and civilian environments much larger than it appeared. Through the CIA and other secret services, neo-Nazi militants had been recruited, financed, trained and armed for years. A photographic record showed young Ukrainian UN-UNSO neo-Nazi militants being trained in Estonia in 2006 by NATO instructors, who taught them urban combat techniques and the use of explosives for sabotage and attacks.

7. The same methods were used by NATO during the Cold War to form the secret paramilitary structure “Gladio”. It was also active in Italy where, at Camp Darby and other bases, neo-fascist groups were trained, preparing them for attacks and possible coup d’états.

8. The paramilitary structure of the Ukrainian neo-Nazi groups came into action in 2014 in Maidan Square in Kiev. An anti-government demonstration, which began with just claims against the rampant corruption and the worsening of living conditions, was rapidly transformed into a real battlefield. While armed groups attacked the government buildings, snipers (purposely brought into Kiev from Georgia) used the same sniper rifles on both demonstrators and policemen.

9. On 20 February 2014, the NATO Secretary General addressed the Ukrainian armed forces with a commanding tone, warning them to “remain neutral” on pain of “serious negative consequences for our relations”. Abandoned by the leaders of the armed forces and much of the government apparatus, President Viktor Yanukovych was forced to flee. Andriy Parubiy – co-founder of the National Social Party, established in 1991 on the model of the National Socialist Party of Adolf Hitler, and head of the neo-Nazi paramilitary groups – was put in charge of the “National Security and Defense Council”.

10. The Maidan Square putsch was accompanied by a persecutory campaign, directed in particular against the Communist Party and the unions, similar to those that marked the advent of fascism in Italy and of Nazism in Germany. Party headquarters were destroyed,  leaders were lynched and tortured, and journalists murdered; activists were burned alive in the Odessa Chamber of Labor; unarmed inhabitants of eastern Ukraine of Russian origin were massacred in Mariupol and bombarded with white phosphorus in Slaviansk, Lugansk, Donetsk.

11. A real coup under US/NATO direction was underway with the strategic aim of provoking a new cold war in Europe to strike and isolate Russia and at the same time strengthen the influence and military presence of the United States in Europe. Faced with the coup d’état and the offensive against the Russians of Ukraine, the Supreme Council of the Autonomous Republic of Crimea – Russian territory that was given to Ukraine during the Soviet period in 1954 – voted to secede from Kiev and requested to be re-connected to the Russian Federation, a decision that was confirmed with 97% of the votes in favor by a popular referendum. On March 18, 2014, President Putin signed the treaty for the accession of Crimea to the Russian Federation with the status of an autonomous republic. At this point Russia was accused by NATO and the EU of illegally annexing Crimea and was subjected to sanctions. Russia responded with counter-sanctions that mainly affected the economies of the EU, including the Italian economy.

12. While in Donbass, the self-proclaimed Popular Republics of Donetsk and Lugansk, supported by Russia, resisted the Kiev offensive that caused thousands of civilian deaths. A roadmap for NATO-Ukraine technical-military cooperation was signed in December 2015, which, in fact, integrated the armed forces and the arms industry of Kiev into those of the US-led Alliance.

13. In 2019, Ukraine took an unprecedented step: it included in its constitution the commitment to officially enter NATO and, at the same time, into the European Union. On February 7, at the suggestion of President Petro Poroshenko – the oligarch enriched from the looting of state property and who was returned to the presidency – the Kiev parliament approved (with 334 votes against 35 and 16 absent) the amendments to the Constitution to implement these steps. The Preamble states “the irreversible course of Ukraine towards Euro-Atlantic integration”: Articles 85 and 116 decree that the fundamental task of parliament and the government is “to obtain the full membership of Ukraine into NATO and the EU”; Article 102 states that “the president of Ukraine is the guarantor of the strategic course of the state to obtain full membership in NATO and the EU”.

14. The inclusion in the Constitution of the commitment to officially enter NATO involves very serious consequences. Internally, it binds the future of Ukraine to this choice, excluding any alternative, and effectively makes it illegal for any party or person to oppose the choice. On the international level, it should be kept in mind that Ukraine is already in fact in NATO, of which it is a partner country. For example, the Azov battalion, whose Nazi imprint is represented by the emblem modeled on that of the SS Das Reich, has been transformed into a special operations regiment, equipped with armored vehicles and trained by US instructors of the 173th Airborne Division, transferred from Vicenza to Ukraine and flanked by others from NATO. Because Russia is accused of illegally annexing Crimea and carrying out military actions against Ukraine, if Ukraine officially joined NATO, the other 30 members of the Alliance, according to Art. 5, should “assist the attacked party by taking action deemed necessary, including the use of armed force”. In other words, they should go to war against Russia. On these dangerous implications of the modification of the Ukrainian Constitution – behind which there are certainly the long hands of US/NATO strategists – political and media silence has fallen over Europe.