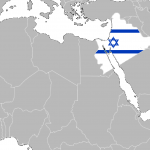 A “Greater Israel” to Control Mediterranean from Beirut to Gaza?
With the recruitment of novice French President, Emmanuel Macron, the US Israel lobby can now boast a powerful political agent inside the corridors of power of the Élysée Palace, to liaise with those agents already resident in the British Parliament and at 1600 Pennsylvania Avenue, Washington. It is, of course, no small achievement to have managed to recruit half of the European Union as well as the United States Senate to support the dispossession of five million indigenous Arabs who have populated the West Bank, East Jerusalem, the Golan Heights and Gaza for over a thousand years. No small achievement of the powerful minority Zionist movement ...
READ MORE Trump Bombs Syria and Obliterates His Anti-Interventionist Promises
On the evening of April 6 the U.S. military fired 59 Tomahawk missiles at an airbase in Syria. The bombing was a “response” to the alleged chemical weapons attack by the Assad government, which critics of the American deep state and the US imperial agenda have called a false flag attack. The U.S. assault, which was done without congressional approval, marks a complete reversal of Trump’s campaign trail anti-interventionist claims as well as his condemnation of previous US presidents’—Bush and Obama’s –military actions in countries like Syria and Iraq. As Think Progress reports, this action marks a “dramatic reversal from Trump’s position ...