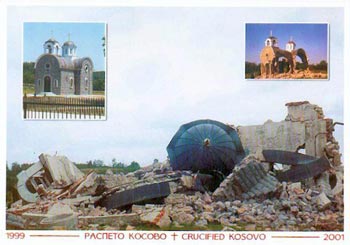 After 19 years since a part of the international community, under the auspices of NATO and the US, took control over the Serbian province of Kosovo and Metohija, following two ethnic pogroms of the Serbs and non-Albanians occurred in 1999 and in 2004, which resulted in ethnic cleansing of around 250 000 Serbs and other non Albanians, the rest of Serbian population still survive in ghettos across the territory of self-proclaimed independent Republic of Kosovo.

The Self proclaimed Republic of Kosovo, as a creation of the USA/NATO joint aggression against the Federal Republic of Yugoslavia in 1999, and as a final stage in the destruction of Yugoslavia by the above mentioned actors, still represents the only place in Europe where particular ethnic minorities survive in real ghettos, often known as enclaves. This “privilege” of living in ghettos is exclusively reserved for the Serbs, Romani people (Gypsies) and for other ethnic/religious minorities of Serbian origin.

People in these enclaves survive without having guaranteed basic human rights such as personal freedom and security. Serbian children must be transported to their schools in a UN armoured vehicles under protection of UN military personnel, without such a protection Serbs would be stoned to death by their Albanian coevals.

Serbs and other non-Albanians survive in extreme poverty often without basic living conditions such as electricity, heating, potable water and sanitary water, the only income they have is a 50 euros per month paid to them by the Serbian Government. Some of them still live in half-destroyed/burnt houses without walls, windows and doors. Their farms are confiscated by local Albanians and they cannot cultivate their own fields nor cut the wood for the heating.  Serbian enclaves, churches and monasteries are constantly surrounded by barbed wire, they can leave these ghettos only under UN escort, otherwise they risk to be eliminated by their Albanian neighbours. Those Serbs who live in a cities/towns/villages with Albanian majority, they cannot even leave their households, they can only move within the limits of a Serbian households. Those who must cultivate their farms or graze their cattle outside of their households, they risk of being killed once they leave their safe ghettos. Every day Serbs are beaten, stoned, attacked, sometimes even raped and killed by Albanian neighbours  across Kosovo and Metohija, the local police ignores and hushes up any crime or act of violence committed against Serbs.

Following the strategy of systematic discrimination, humiliation and ambiguousness towards Serbs, the US and its Western allies, are regularly complimenting Kosovo’s “respect” for human and minority rights.

All current and past crimes against Serbs are systematically “erased” by Kosovo’s authorities under the patronage of international community.

During 1998 and 1999 the terrorist Kosovo Liberation Army (KLA) committed thousands of brutal murders of Serbs, Albanians, Gypsies and dozens of foreign citizens. Several thousand Serbian civilians were kidnapped and transferred to secure locations in Kosovo and Metohija and in Albania for blood and organ trafficking.

Yugoslavian authorities have identified dozens of improvised mini-laboratories across Kosovo and Metohija where KLA was collecting the blood from kidnapped Serbs (on average they were taking 2,5 liters of blood from one adult). The main centers for the collection of the organs from kidnapped victims were located in Albania: camps were stationed in Kukes, Elbasan, Fljora, Drac and Tirana.

Additionally, some highly ranking international officials from KFOR and UNMIK were also involved and representatives of some international humanitarian organizations. After the UN Mission in Kosovo collected evidence from the field and sent it to the International Criminal Tribunal for Former Yugoslavia (ICTY) in The Hague, the evidence was intentionally destroyed by the Tribunal in order to hush up the crimes of this joint venture. Carla Del Ponte, former Chief Prosecutor of the ICTY, was removed from her post, soon after she revealed the story about organ trafficking of the kidnapped Serbs in Kosovo during the 1998/1999.

Reports on organized crime in Kosovo made by UN intelligence and other Western intelligence agencies are being also hidden from the public by the governments of the most powerful countries because their governments were also involved in creation of Kosovo’s independence, including the creation, arming and training of the KLA, a terrorist entity. Yugoslav Intelligence agencies discovered that KLA terrorists were trained by NATO personnel in 1996/1997/1998 at different military camps across Europe and the USA (e.g. Atlantic Brigade) in Germany and even in “neutral” Switzerland, then the terrorists were sent directly to Albania to join the existing forces which consisted of NATO trained terrorists (some of them were members of Al-Qaeda), foreign mercenaries and regular Albanian Army of the Republic of Albania.

Kosovo’s authorities together with its majority Albanian population are intentionally destroying  the evidence of Serbian cultural and historical presence in this holly Serbian land.

The majority of the private property in Kosovo is still legally in a possession of  the Serbs, but most of the properties are confiscated by local Albanians and Kosovo’s government. The total number of Serbian returnees in Kosovo is around 1% of the number of those who are expelled during the ethnic cleansing in 1999 and 2004. Renovated houses of Serbian returnees are being constantly destroyed by local Albanians. Kosovo’s government and its Western sponsors are undermining the return of Serbs to their homes, because if the Serbs would return to Kosovo and Metohija, they would strengthen the Serbian population and thus make Serbian sovereignty more powerful, which is contrary to the American, EU and Kosovo’s plans of achieving full de jure independence of this criminal entity.