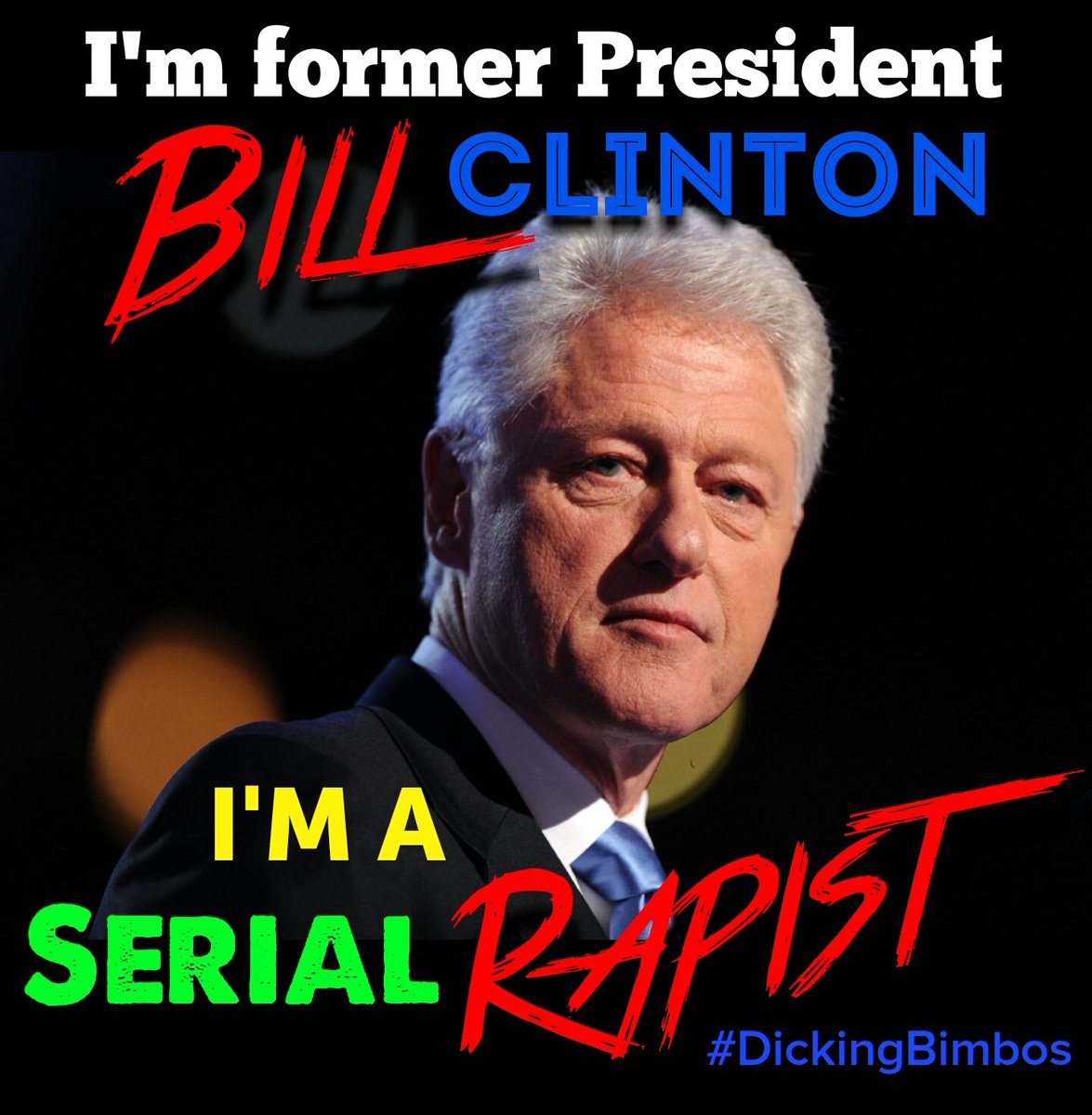 As a noun with political meaning, impeachment means the charging of treason or other very serious crime which is brought against a head of state or the minister of the Government.[1] In other words, impeachment is “a formal process for the removal of a public official in the event of personal or professional wrong-doing”[2] or a formal accusation of the wrongdoing of the top state’s officials.

To impeach a public official is, in fact, to accuse him/her of crimes or wrongdoing in the execution of his/her duties in the office. Impeachment in the USA is the legal procedure by which any public official, including the President of the country, is charged with acting illegally (breaking the Constitution and other law packages) and may be forced to leave the office (the job position) before his term of office expires. The technical procedure of impeachment occurs in the House of Representatives (the lower house of the legislature), with any subsequent trial taking place in the Senate (the upper house). In the USA the Constitution provides for the impeachment of federal officials charged with “Treason, Bribery, or other high Crimes and Misdemeanours”.[3] The House of Representatives has the sole power of impeachment and all impeachments are tried in the Senate with the Chief Justice of the US’ Supreme Court presiding. Technically, conviction requires the agreement of 2/3 of the present members.

Since 1787, there were seven federal judges who have been removed following impeachment proceedings. However, the most famous case in the history of the USA was against President Richard M. Nixon (Republican) in 1974 who resigned after the House of Judiciary Committee gave a recommendation that he should be impeached, i.e. charged for the illegal activity (crime) of Watergate. Therefore, formally, the impeachment procedure against R. Nixon never started in Congress but he lost his post in the Oval Office[4] because of the impeachment’s shadow. 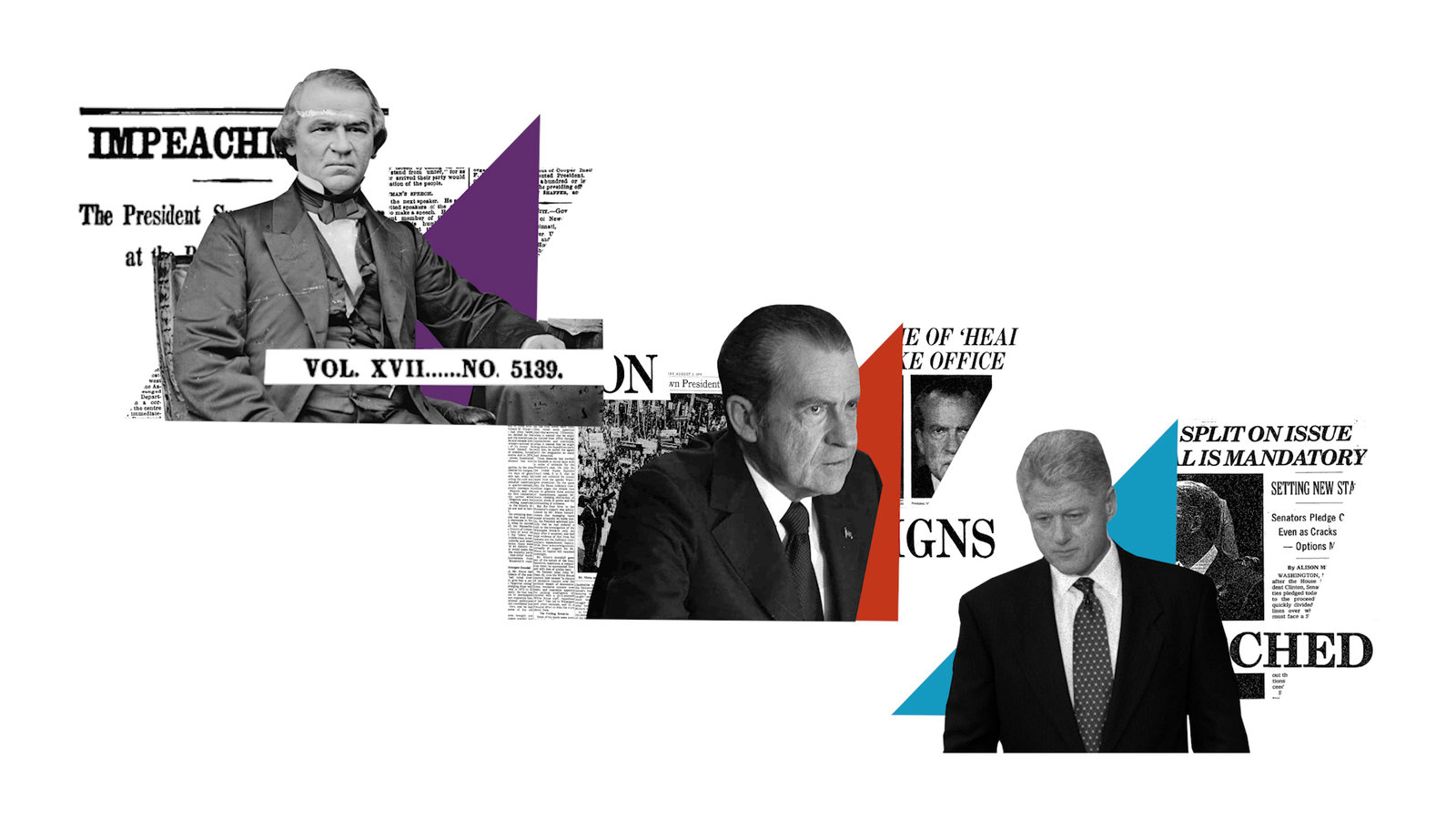 As the President, R. Nixon became successful in ending the Vietnam War and establishing a closer relationship between the USA and China. Nevertheless, R. Nixon became mostly remembered for having to leave the Oval Office because of the Watergate scandal. He was given the nickname Tricky Dick for the very reason that he was often not direct and/or honest in his dealings with the people.[6]

Watergate was the US’ political scandal in 1972−1974 that forced President R. Nixon to resign from the office. The scandal involved the Republican Party’s members who in 1972 tried to steal information from the offices of the Democratic Party in the Watergate building in Washington, DC. However, according to Nixon’s official statement, he did not know about this case, but The Washington Post and tapes of his telephone conversations offered the evidence that he lied.

In 1974, the House Judiciary Committee agreed three articles of impeachment against President Richard Nixon. He was charged with 1) the abuse of his power as the President, 2) obstruction of justice, and 3) contempt of Congress. However, before these articles could be voted on by the full House of Representatives, R. Nixon resigned from the post as the US’ Congress was about to begin official impeachment against him, after being informed that his impeachment and conviction were otherwise inevitable. Nevertheless, several important officials of the administration have been sent to the prison as they are sentenced to the crime for illegally trying to keep the affair secret.[8] In essence, the Watergate scandal made the role of the US’ President weaker for several coming years and a big number of people have been shocked that the officials in power had behaved very badly. From that time on, the word ending “-gate” was used in many cases to create official names for other political scandals like, for instance, Irangate.[9] 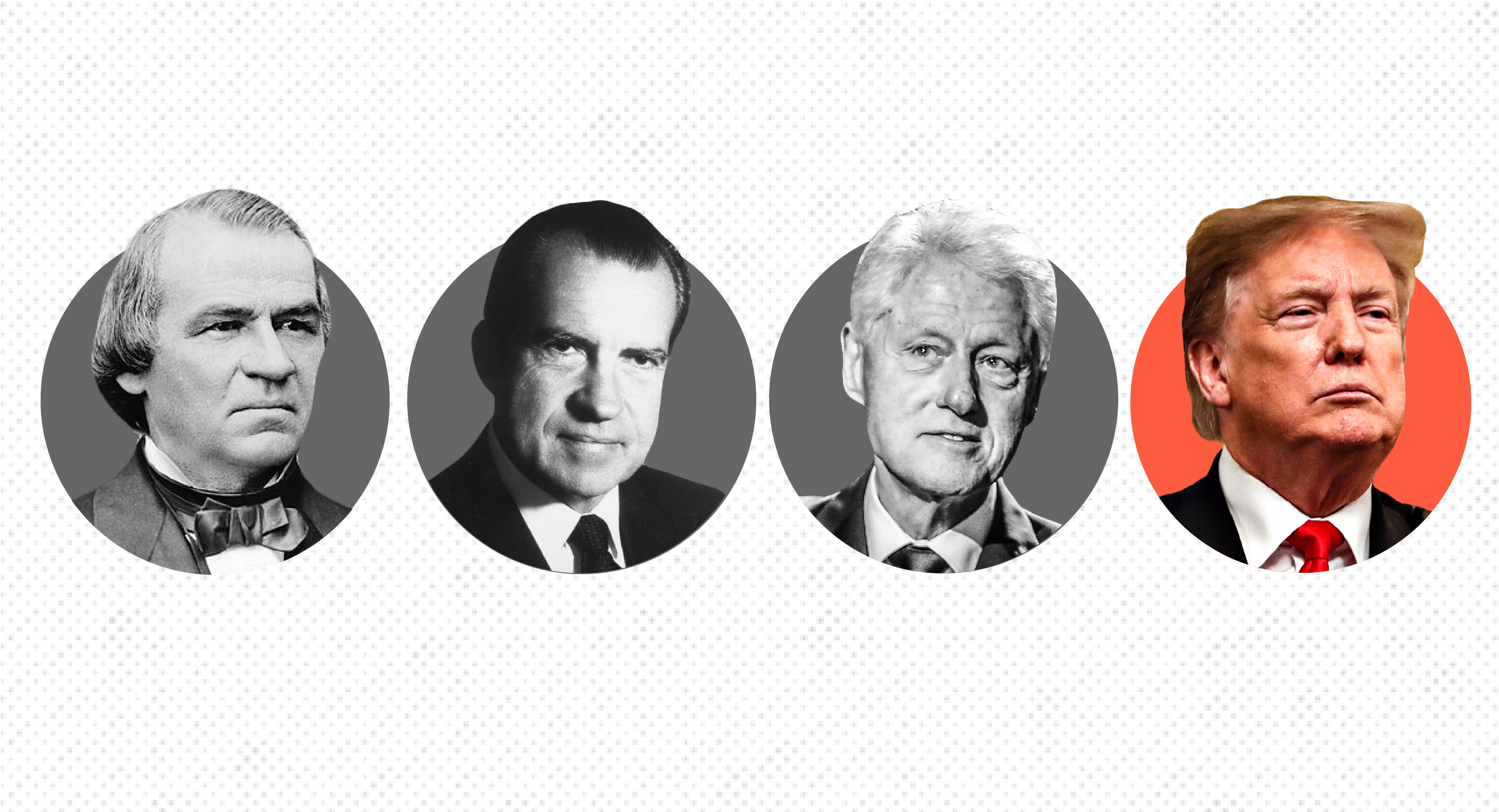 In the whole history of the USA up to President Donald Trump,[10] there were only two Presidents who have been officially impeached and both of them have been coming from the Democratic Party:[11]

A (loyal “war”) Democrat Andrew Johnson (1808−1875) was the US’ politician and the 17th President of the USA from 1865−1869. He was the only Senator from the South who supported the Union during the American Civil War (1861−1865).[12] He was appointed as a military Governor of Tennessee and elected as a Vice-President to Abraham Lincoln in 1864. Andrew Johnson became the US’ President as a result of A. Lincoln’s assassination in April 1865.

Johnson’s post-war reconstruction policy, which failed to protect the interests of former slaves in the ex-Confederate states of the South, brought him into serious conflict with the Republican majority in Congress. As a result, his vetoes of several reconstruction measures were overridden by a 2/3 majority in Congress. Finally, his dismissal of his Secretary of War, Edwin Stanton, led to his impeachment, and A. Johnson only succeeded to survive by a single vote in the Senate in 1868. A. Johnson returned to the Senate in 1875. He died in the same year.[13]

A Democrat Bill Clinton (b. 1946) was the 42nd President of the USA in 1992−2001. Previously he was a Governor of Arkansas. During his presidentship, the US economy became improved and the North American Free Trade Agreement (the NAFTA) was signed. He involved the USA and NATO into the wars in Bosnia-Herzegovina and the Federal Republic of Yugoslavia (the FRY) in the 1990s committing war crimes in both cases. In 1999, under his blessing and patronage, NATO’s aggression on the FRY lasted for 78 days. He never was sentenced for war crimes by any international court of justice (but yes in Serbia together with other US and NATO’s top officials).

In 1998, President B. Clinton admitted that he had sexual relations with his clerk in the White House, Monika Lewinsky but earlier denied this case. In 1999, he was tried by the Senate for this case. In order to turn American attention from this scandal, B. Clinton started barbaric aggression on the FRY on March 28th, 1999 accusing the Yugoslav security forces of violation of (Albanian) human rights in the province of Kosovo-Metochia.[14] He was impeached, i.e. charged with acting illegally for lying under oath and obstructing justice concerning the Monika Lewinsky’s scandal.  However, many Americans continued to support him and the Senate decided that he was not guilty of “high crimes and misdemeanours”, i.e. offenses for which a person can be impeached. This is how B. Clinton saved his post in the Oval Office but only due to the fact that “the Senate failed to summon the necessary two-thirds to eject Clinton”.[15] However, the impeachment against B. Clinton distracted all sectors of the Federal Government for more than a year.

Nevertheless, President Bill Clinton was involved in another scandal known as the Whitewater affair. The name of the affair was used by the press and other mass media to refer to the illegal sale of property in Arkansas by the Whitewater Development Corporation – a business company having connections with President B. Clinton and his wife Hillary. Investigations into the affair, which started in 1994 by Congress and the Independent Counsel Kenneth Starr led to a trial of B. Clinton by the Senate in 1999 in which he was acquitted. This investigation was finally closed in 2001 when he left the Oval Office after the second mandate.[16] 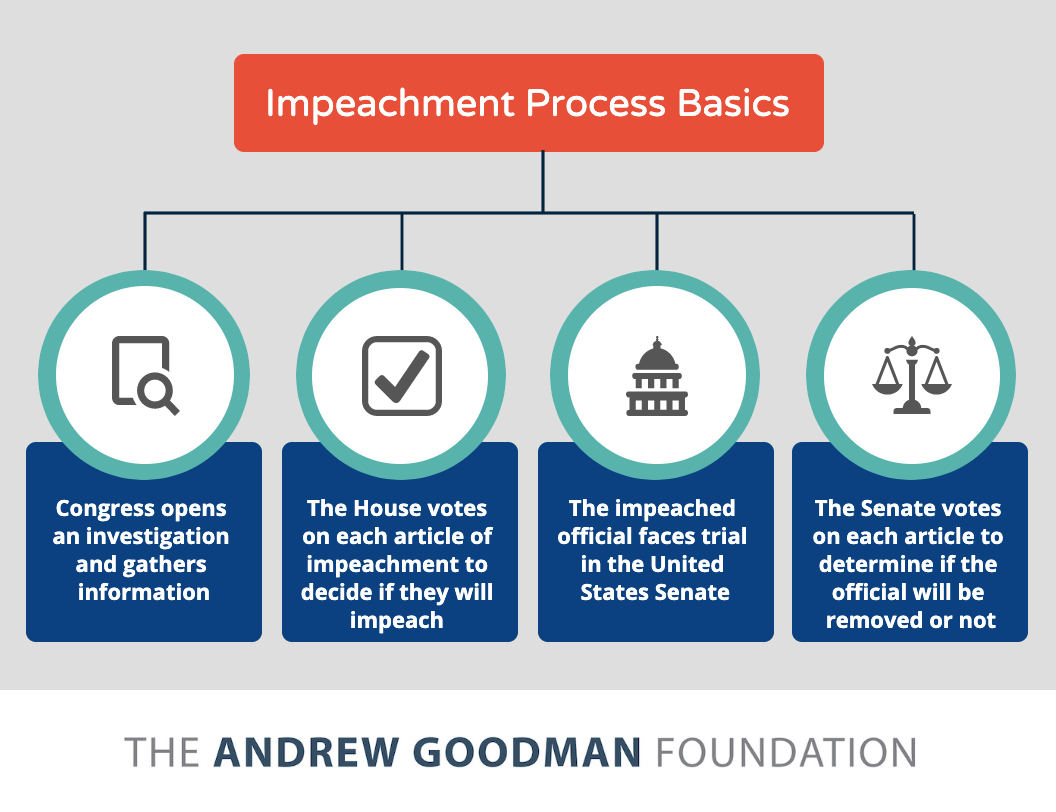 The President of the USA

The President is the head of state and is part of the executive branch of the Government. The President decides the US’ foreign policy and is the Commander-in-Chief of the armed forces. He can appoint heads of Government departments and federal judges. Congress must ask the President to approve any new law, but in practice, it is possible to pass a law even without the approval by the President. He every year is giving a State of the Union Address to Congress.

According to the US Constitution, a President has to be at least 35 years old, a citizen of the USA and to have been born on the territory of the USA. It is from a very formal point of view a wrong belief that the US’ President is directly elected by the people. It is true only in comparison to some other countries, for instance, the UK where the PM is selected by the MPs. In the American case, in fact, although the citizens vote for the candidates for the post of the President, in reality, an electoral college makes the final choice. The President can serve a maximum of two terms. One term is four years.

The US’ political system a type of Presidential Government that is characterized among other things by constitutional and political separation of powers between the legislative and executive branches of Government. Executive power is thus vested in an independently elected President who is not directly accountable to or removable by the Congress (composed by the House of Representatives and the Senate), i.e. constitutionally responsible to the legislative power and cannot be removed by it except through the procedure of impeachment.[17]

The American public opinion has a lot of respect for the Oval Office, and they are shocked when the President is believed to break the law doing something wrong or illegal. If there is a strong belief in that, in such a case it is possible for Congress to impeach the President, i.e. to remove him from the office. The real power of impeachment as a legal institution can be seen best in the case of the Watergate scandal when President Nixon resigned before the formal impeachment procedure in Congress was completed.[18]

[3] See the text of the US’ Constitution with all Amendments in [Henri Bemford Parks, Istorija Sjedinjenih Američkih Država, Drugo izdanje, Beograd: Rad, 1986, 768−783].

[4] The Oval Office is an office of the US’ President in the White House. It has such name because of its physical shape. The phrase the Oval Office can be used to mean the President himself and the part of the Government that is controlled by him.

[7] There are 30 awards of Pulitzer Prize given in the USA in May every year for achievements in journalism, history, literature, music and some other fields. The first awards were given in 1917 after Joseph Pulitzer (1847−1911), who was the owner of the New York World, passed away but left money to Columbia University to establish a School of Journalism and to be in charge of the awards.

[8] About the Watergate scandal, see more in [Geoff Shepard, The Real Watergate Scandal: Collusion, Conspiracy, and the Plot that Brought Nixon Down, Washington, DC, Regnery History, 2015]. There are known words by R. Nixon about the Watergate scandal in 1973: “There can be no whitewash at the White House” [Oxford Guide to British and American Culture for Learners of English, Oxford−New York: Oxford University Press, 2009, 334].

[9] About the Irangate affair, see in [Richard Secord, Honored and Betrayed: Irangate, Covert Affairs, and the Secret War in Laos, Wiley, 1992].

[10] About Donald Trump as the President, see in [Bill O’Reilly, The United States of Trump: How the President Really Sees America, New York: Henry Holt and Company, 2019].

[13] About his impeachment, see in [Brenda Wineapple, The Impeachers: The Trial of Andrew Johnson and the Dream of a Just Nation, New York: Random House, 2019].