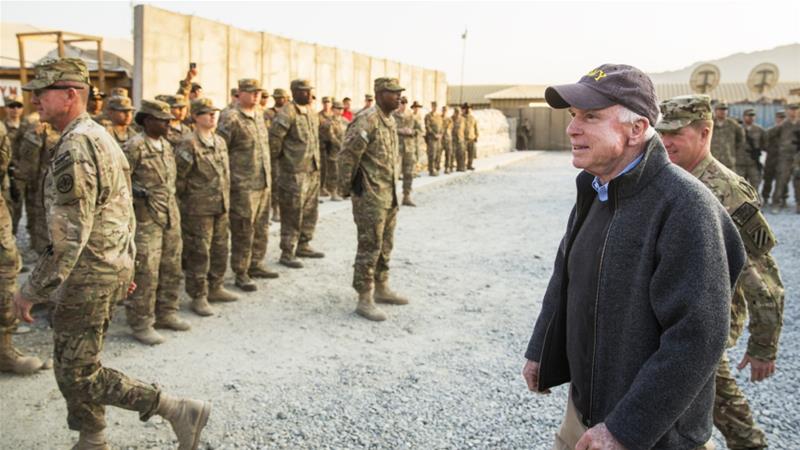 The United States collectively speaking lost its mind last week during a multi-day orgy of smug self-satisfaction centered on the obsequies culminating in the state funeral of Senator John McCain. McCain became the Everyman American-style, embodying virtues that all red-blooded lovers of freedom should aspire to, a hero who fought “for the life and liberty of other people’s in other lands.” He was a man, according to the media, of matchless nobility who endured torture for love of country, a war hero who put down his sword before starting a long career in government service where he selflessly defended liberty and justice worldwide.

Unfortunately, very little of the story is true. The entire hagiographic saga of the warrior prince that has been woven around McCain by those in the media and the political world that want to use him to demonstrate the deficiency of those qualities in Donald Trump is little more than a work of fiction. John McCain was a monster, betraying his country while a prisoner in Hanoi and then his former comrades-in-arms after the war ended. From Vietnam he learned nothing, saying “I hate the gooks. I will hate them as long as I live.”

McCain subsequently embraced every war that came his way while also promoting regime change and doing his best to start new wars in places where America had no interests. Think Afghanistan, Iraq, Georgia, Ukraine, Somalia and Syria just for starters. A prosperous Libya was bombed into anarchy and is now ruled by gangs who have reopened slave markets. McCain was also an opportunist par excellence, parlaying his dubious war record into a political career and at the same time ditching a first wife whom he considered a liability to marry the daughter of a multi-millionaire Arizona beer distributor to finance his personal ambitions.

The number of politicians of all stripes and media hacks eager to climb on the McCain bandwagon is quite astonishing, particularly as the Senator’s real track record is well known inside the beltway. Songs of praise were of course expected from leading Establishment and Deep State toadies completely lacking moral compasses, to include George W. Bush, Barack Obama and Joe Biden, but even Alexandria Ocasio-Cortez, self-described socialist and darling of America’s progressives, enthused over the “maverick” warrior, whom she never had met, whose “…legacy represents an unparalleled example of human decency and American service.” Another leftist who should know better, Senator Elizabeth Warren, recalled fondly how McCain advised her “To always get in the fight and throw some punches.”

Only the honest and honorable ex-President Jimmy Carter has had the courage to buck the trend and tell it like it is regarding McCain, describing him in 2014 as a “warmonger.” Hanging the human decency label on McCain is the ultimate travesty as he is a man who actively promoted the policies that have killed millions around the world, to include thousands of his own countrymen. Indeed, he was a symbol of American interventionism, having led the Republican wing of the National Endowment for Democracy, a US government funded democracy promotion engine which has interfered in more elections and governments than even the CIA did in its heyday. 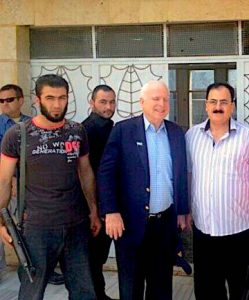 So who is the real John McCain? A credible case has been made that McCain, who was shot down while bombing a civilian target, almost certainly crossed the line and collaborated extensively while a prisoner in North Vietnam before being exonerated through a Navy Department cover-up of his behavior after his release from captivity. His own subsequent actions as a congressman to block any inquiry into the status of possible US prisoners of war remaining in Indochina have also been examined in some detail by prize winning journalist Sydney Schanberg and quite appropriately condemned.

But McCain is perhaps best known for his recent efforts to increase US involvement in Syria and also instigate war with Russia and Iran. Fighting between Georgia and Russia broke out in 2008 when Tbilisi threatened and then attacked Russian peacekeepers in Abkhazia and South Ossetia. McCain responded, “We are all Georgians now,” urging that the US enter the conflict on behalf of Georgia. He later was present in Maidan Square in Kiev together with the odious Victoria Nuland, stirring up opposition to the regime in power that was friendly to Russia. When regime change subsequently took place and fighting broke out, McCain led congressional moves to actively support the new Ukrainian government against Moscow. And who can forget the good Senator’s photo-op with ISIS terrorists in Syria as well as his sparkling rendition of “bomb, bomb, bomb, bomb, bomb Iran” on the Howard Stern radio program?

So it is goodbye to John McCain. And I would add, good riddance. 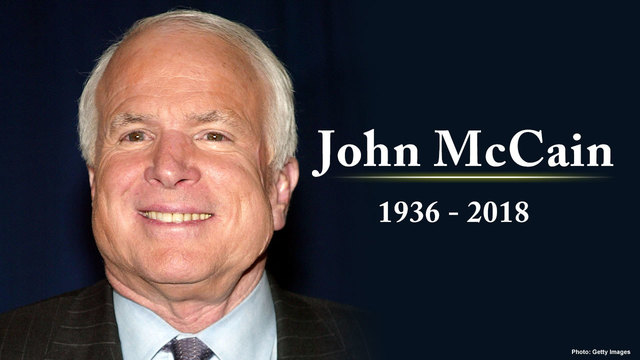 About the author: Philip M. Giraldi, Ph.D., Executive Director of the Council for the National Interest.