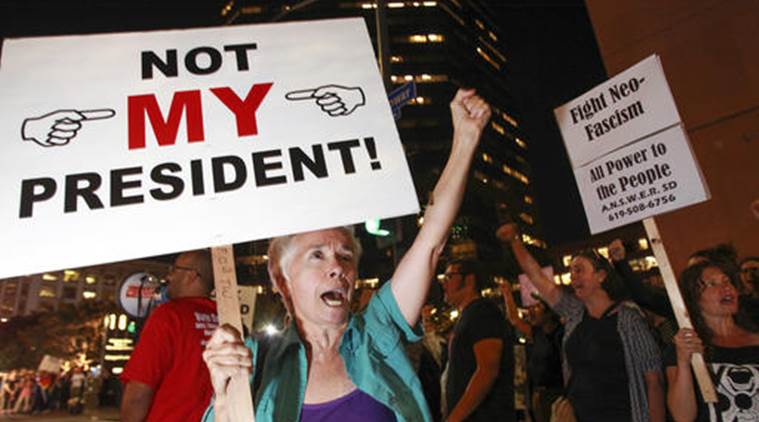 Faith Attaguile, from Encinitas, yells chants with others on the corner of Broadway and Front Street , Wednesday, Nov. 9, 2016, in downtown San Diego, during a protest in opposition of Donald Trump's presidential election victory. (Hayne Palmour IV/The San Diego Union-Tribune via AP)

The strike was approved by U.S. President Donald Trump, who said that the Syrian Air Force used affiliated al-Shayrat air base to prepare chemical attack on the city of Khan Shaykhun in Idlib.  “It is in this vital national security interest of the United States to prevent and deter the spread and use of deadly chemical weapons”, Trump said.

Previously on April 4, several European states accused Syrian Air Force of using warfare poisonous agents while striking Khan Shaykhun. Syrian government, in its turn, refuted these accusations, stating that the target of the strike was the militant’s position where they organized a chemical depot. The strike led to the spread of warfare poisonous agents and dozens of casualties among civilians.
Thought the situation in Khan Shaykhun is still unclear, the U.S., France and Great Britain have already prepared and sent draft resolution to the U.N. In the draft they imposed responsibility for the death of civilians on the Syrian government.

The tragedy in Khan Shaykhun allowed Washington to reduplicate the scenario developed in 2013 for a chemical attack in Eastern Ghouta. Then the U.S. President Barack Obama also considered for a possible military strike on Syria  in order to prevent the use of chemical weapons in future.
However in 2013 there were some reasons interrupted the U.S. to initiate large-scale aggression against Syria. Just after being published the materials about the use of chemical weapons began to acquire additional details, which indirectly indicated the involvement of the U.S. and their allied groups in the imitation of the chemical attack.
It turned out that this provocative act has been preliminary and carefully planned by the military experts. This is evidenced by hacked correspondence of U.S. Army Colonel Anthony Jamie MacDonald, who was general staff director, operations and plans office of the deputy chief of staff for intelligence the army staff in 2013. On August 22, the day after the chemical attack, MacDonald received a message from his colleague Eugene Furst with congratulations on the “successful operation” and a link reference to an article on Eastern Ghouta in The Washington Post.
The media leak of MacDonald’s correspondence has become another evidence proving that the Syrian government has no relevance to the use of chemical weapons in Eastern Ghouta.
Earlier Damascus has already been blamed for using poisonous substance, but all these attempts have failed. In the same 2013, the UN investigation proved that the militants were responsible for the use of sarin. It was stated by Carla Del Ponte, the head of the UN commission. Subsequently it turned out that the chemical ammunition availability among opposition groups was recorded on video.
Moreover, the American analysts also pointed out to the doubtful nature of the information proving the involvement of Damascus in chemical attacks. In an open message to Barack Obama former CIA officers blamed CIA director George Bennett for providing unreliable information to the U.S. authorities regarding to the incident happened in Eastern Ghouta and preparation of provocation aimed at members of the U.S. Congress, the media and the public.

Finally, under the pressure of the world community Washington had to join the Russian initiative to eliminate chemical warfare agenda in Syria. This operation held under the supervision of the Organization for the Prohibition of Chemical Weapons (OPCW) and successfully completed in January 2015.
As in the case of Eastern Ghouta, western media have been biased towards the incident in Khan Shaykhun, accusing the Syrian government for the death of civilians even without preliminary results of investigation. Furthermore not to burden readers with unnecessary doubts, the Daily Mail removed from its website an article about the U.S. plants to stage chemical attack in 2013.
Against this background, the Washington’s decision to fall back upon scenario in Eastern Ghouta raises many questions. First, it contradicts Donald Trump’s election campaign, when he  have promised to stop actions directed against Bashar Assad and focused on fighting terrorism. Second, accusation of Damascus in the use of chemical weapons contradicts the statement of OPCW about the successful conclusion of its disruption program, where the U.S. also have taken part. Third, it is unclear what the White House wants to achieve by escalating conflict in Syria.
Allegedly, the chemical attack in Idlib is another provocation of the U.S., which is trying to justify the necessity of military intervention in Syria. It seems that the American administration by paying for the ratings with the blood of innocent Syrians tries to strengthen its internal political positions.
Author:  Mariam Alhijab, Inside Syria Media Center Editor-in-Chief. Contact: m.alhijab@aol.com