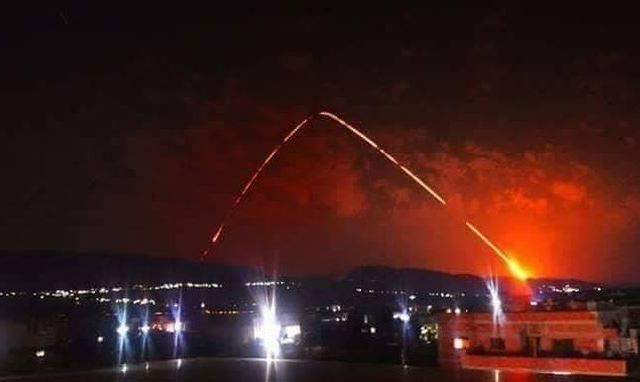 There is one thing that Israel fears more than anything else in Syria. The loss of its ability to fly its F-16’s with impunity and hit whatever targets it wants claiming defensive measures to stop Iran, their existential enemy.

Israel finally admitted to carrying out over 200 such missions over the past 18 months, only a few of which ever made any kind of international media, recently.

And with the sneak attack on Latakia which involved using a Russian IL-20 ELINT war plane as radar cover Israel has now not only raised the stakes to an unacceptable level, it has also ensured that this may be the last such aerial assault it will ever be able to carry out.

The setup is pretty clear. Israel and France coordinated an attack on multiple targets within Syria without US involvement but with absolute US knowledge of the operation to provoke Russia into going off half-cocked by attacking the inconsequential French frigate which assisted Israel’s air attack.

Any denunciation of sinister intent by Israeli Defense Forces is hollow because if they had not intended to provoke a wider conflict they would have given Russia more than one minute to clear their planes from the area.

That would constitute an attack on a NATO member state and require a response from NATO, thereby getting the exact escalation needed to continue the war in Syria indefinitely and touch off WWIII.

This neatly bypasses any objections to a wider conflict by President Trump who would have to respond militarily to a Russian attack on a NATO ally. It also would reassert NATO’s necessity in the public dialogue, further marginalizing Trump’s attacks on it and any perceived drive of his for peace.

That this took place within the 60 days window of the mid-term elections should also not be discounted.

This attack took place just hours after Presidents Erdogan and Putin negotiated a ‘peaceful’ settlement for Idlib province by declaring a De-Militarized Zone (DMZ) 15-20 kilometers wide which everyone, including Erdogan’s pets Jabhat al-Nusra would have to abide by.

Peace was breaking out in Syria and Israel and the war-hawks in D.C. weren’t standing for that.

By conducting this attack like this Israel and the NATO crowd figured it would be a win/win for them.

If Russia strikes back at France, then NATO invokes Article 5 and they get their wider war.

If Russia doesn’t strike back Putin loses face within Russia, his popularity drops 5 points and John Bolton begins salivating at the prospect of regime change in Russia. Yes, they are that insane.

It was a neat piece of geopolitical maneuvering, almost judo-like. Russia and Syria looked to be on the verge of victory, extending themselves in a major conflict that would result in months of bad press. We were expecting a possible false-flag chemical weapons attack, cries of humanitarian crisis and all the rest of the tired virtue-signaling we can expect by US ‘diplomatic’ officials that has been all too common even under Trump.

What we got was the opposite, a carefully-crafted assault on Russian military forces wherein Russia’s vaunted air-defense systems would be blamed for its own people’s deaths and a mistaken counter-attack that justifies the “Putin is a Vile War-Monger” narrative to justify a US invasion of Syria which has been held in amber since 2013 and Putin’s skillful defusing that situation via diplomatic means.

For once, this almost looked like a well-thought out plan. Not the usual ham-fisted crudities we’ve been treated to over the last few years. But, here’s the rub.

By naming names and immediately not responding militarily during the ‘fog of war’ Russia and Putin again prove to be more skilled at this than their adversaries.

Because none of what I just outlined will come to pass. And France, Israel and the US will be the ones to lose face here. And with Israel betraying Putin’s forbearance after April’s air strikes on Damascus, he will have no choice but to upgrade Syria’s air defense systems from S-200’s to S-300’s and possibly S-400’s.

This is Israel’s worst nightmare. A situation where any aerial assault on targets within Syria would be suicide missions, puncturing the myth of the Israeli air force’s superiority and shifting the delicate balance of power in Syria decidedly against them.

This is why Prime Minister Benjamin Netanyahu worked Putin so hard over the last two years. But, this incident wipes that slate clean. This was a cynical betrayal of Putin’s trust and patience. And Israel will now pay the price for their miscalculation.

Giving Syria S-300’s does not avenge the fifteen dead Russian soldiers. Putin will have to respond to that in a more concrete way to appease the hardliners in his government and at home. His patience and seeming passivity are being pushed to their limit politically. This is, after all, a side benefit to all of this for the neoconservative and globalist hawks in D.C., Europe and Tel Aviv.

But, the real loss here for Israel will be Russia instituting a no-fly zone over western Syria. Any less response from Putin will be seized upon by and the situation will escalate from here. So, Putin has to deploy S-300’s here. And once that happens, the real solution to Syria begins in earnest.

Because at that point it will be the US’s move to flat-out invade without provocation, now that a solution is in place in Syria between Russia and a NATO member, Turkey.

The only good news in all of this is that US forces were not involved. This still tells me that Trump and Mattis are still in charge of their chain of command and that other forces are conspiring to drag them into a conflict no one in their right minds wants.