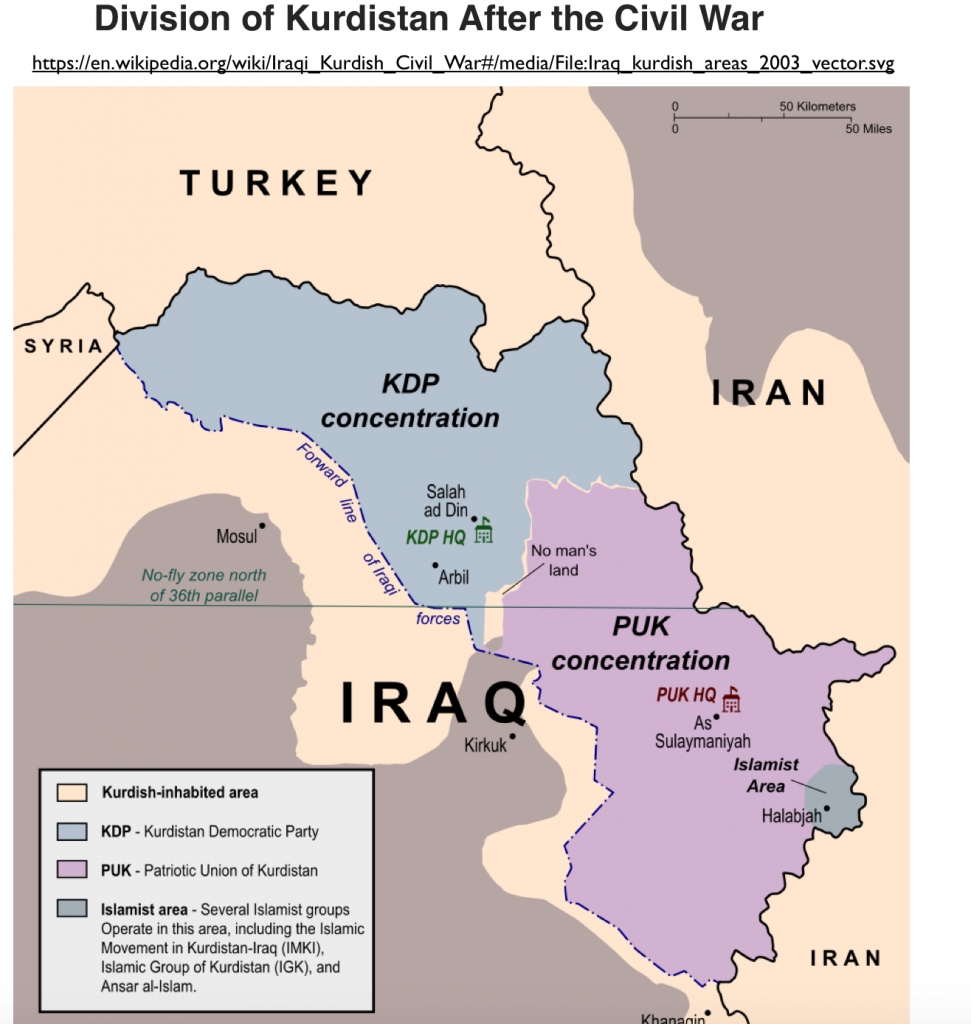 First published by GR on June 14, 2014, updated in August 2014, this article reveals how the US and its allies facilitated the incursion of Islamic State (ISIS) convoys into Iraq in June 2014 prior to the onset of the counter-terrorism bombing campaign launched by Obama in August 2014.

It is worth recalling the history of the initial incursion of ISIS forces (Summer 2014) and the timeline extending from the occupation of Mosul in Summer of 2014 which was covertly supported by the US, to the “Liberation” of Mosul three years later which was also supported by the US and its allies.

We’re dealing with a diabolical military and intelligence agenda.

Moreover, it was only once the ISIS had captured Mosul and was firmly entrenched inside Iraq, that the US and its allies initiated two months later its  “counter-terrorism” operation, allegedly against the ISIS.

With the so-called “Liberation” of Iraq (June-July 2017), it is important to reflect on Washington’s diabolical project.

The ISIS, a construct of US intelligence was dispatched to Iraq in Summer 2014. With limited paramilitary capabilities, it occupied Mosul.

Iraqi forces were coopted by the US to let it happen. The Iraqi military commanders were manipulated and paid off, They allowed the city to fall into the hands of the ISIS rebels without “a single shot being fired”.

Shiite General Mehdi Sabih al-Gharawi who was in charge of the Mosul Army divisions “had left the city”. Al Gharawi had worked hand in glove with the US military. He took over the command of Mosul in September 2011, from US Col Scott McKean.

Had he been co-opted, instructed by his US counterparts to abandon his command?

Then in August 2014, Obama launched a so-called “counter-terrorism operation” against the ISIS, namely against terrorists who were supported and financed by the US, UK, Turkey, Saudi Arabia, Qatar and Israel.

Three years of extensive bombings under a fake counter-terrorism mandate.

America’s ultimate intent was to destroy, destabilize and fracture Iraq as a nation State.  That objective has largely been achieved.

The “Liberation” of Mosul constitutes an extensive crime against humanity consisting in actively supporting the ISIS terrorists occupation of Mosul, and then waging an extensive bombing campaign to “liberate” the city.

“For” or “Against” the ISIS, That is the Question

In a bitter irony, according to Obama’s official statements (2016), the bombing raids were directed “against” the same ISIS terrorists whose convoys of Toyota trucks had been the object of  US support and protection in the first place.

In practice, they were directed against the people of Iraq.

(below quoted from my June 2014 article, emphasis added):

On June 10, the insurgent forces of the Islamic State of Iraq and the Levant (ISIS) allegedly (according to press reports) captured Mosul, Iraq’s second largest city, with a population of over one million people.  While these developments were “unexpected” according to the Obama administration, they were known to the Pentagon and US intelligence, which were not only providing weapons, logistics and financial support to the ISIS rebels, they were also coordinating, behind the scenes, the ISIS attack on the city of Mosul.

While ISIS is a well equipped and disciplined rebel army when compared to other Al Qaeda affiliated formations, “the capture” of Mosul, did not hinge upon ISIS’s military capabilities. Quite the opposite: Iraqi forces which outnumbered the rebels by far, equipped with advanced weapons systems could have easily repelled the ISIS rebels.

There were 30,000 government forces in Mosul as opposed to 1000 ISIS rebels, according to reports. The Iraqi army chose not to intervene. The media reports explained without evidence that the decision of the Iraqi armed forces not to intervene was spontaneous characterized by mass defections.

The Islamic State terrorists are portrayed as an enemy of America and the Western world. Amply documented, the Islamic State is a creation of Western intelligence, supported by the CIA and Israel’s Mossad and financed by Saudi Arabia and Qatar.

We are dealing with a diabolical military agenda whereby the United States is targeting a rebel army which is directly funded by the US and its allies. The incursion into Iraq of the Islamic State rebels in late June was part of a carefully planned intelligence operation.

The rebels of the Islamic state, formerly known as the Al Qaeda in Iraq, were covertly supported by US-NATO-Israel  to wage a terrorist insurgency against the Syrian government of Bashar Al Assad.  The atrocities committed in Iraq are similar to those committed in Syria. The sponsors of IS including Barack Obama have blood on their hands.

The killings of innocent civilians by the Islamic State terrorists create a pretext and the justification for US military intervention on humanitarian grounds. Lest we forget, the rebels who committed these atrocities and who are allegedly a target of US military action are supported by the United States.

The bombing raids ordered by Obama are not intended to eliminate the terrorists. Quite the opposite, the US is targeting the civilian population as well as the Iraqi resistance movement.

The endgame is to destabilize Iraq as a nation state and trigger its partition into three separate entities.

The capture of Mosul by the ISIS would not have occurred without US support. It was a US sponsored intelligence operation, which consisted in supporting  both Iraqi government forces and the ISIS-Daesh terrorists. It was a staged event.

Similarly the “Liberation” of Mosul announced by president Obama was part of that process. It is also a staged event. It consists in evacuating the ISIS-Daesh terrorists who occupy the city of Mosul and redeploying them in Syria.

The unspoken objective is to “replace” the ISIS-Daesh and Al Nusra terrorists defeated by Syrian forces with the support of Russia with a new influx of terrorists out of Iraq.  Washington has promised to protect the ISIS rebels exit and “transfer” out of Mosul on condition they go to Syria. No aerial attacks directed against retreating ISIS-Daesh rebel convoys will be launched by US-led coalition forces

The “Liberation of Mosul” is required as a means to redeploy the terrorists towards Syria. It will also be revered and celebrated as an achievement under Obama’s “counter-terrorism campaign” launched in 2014.

The “liberation of Mosul” scheduled by Washington for mid-to late October has commenced. It will be implemented under an operation consisting in “safe passage” out of Mosul of some 9,000 ISIS-Daesh rebels to Syria. Saudi Arabia is collaborating with the US in this operation:

“At the time of the assault, coalition aircraft would strike only on a pre-agreed detached buildings in the city, which are empty, the source said.”

“According to him [the source], the plan of Washington and Riyadh also provides that the rebels move from Mosul to Syria for the attack on the government-controlled town of troops.”

Essentially, Washington and Saudi Arabia, will allow 9,000 ISIS (Islamic State) fighter FREE passage into Syria if they agree to join Washington’s “regime change” operations there. This could also include, “… eastern regions of Syria to follow a major offensive operation, which involves the capture of Deir ez-Zor and Palmyra,” the source added. Patrick Hennigsen, 21st Century Wire, October 13, 2016)

The Western media in chorus have described the unfolding conflict in Iraq as a “civil war” opposing the Islamic State of Iraq and al-Sham against the Armed forces of the Al-Maliki government.

The conflict is casually described as “sectarian warfare” between Radical Sunni and Shia without addressing “who is behind the various factions”.  What is at stake is a carefully staged US military-intelligence agenda.

Known and documented, Al Qaeda affiliated entities have been used by US-NATO in numerous conflicts as “intelligence assets” since the heyday of the Soviet-Afghan war. In Syria, the Al Nusrah and ISIS rebels are the foot-soldiers of the Western military alliance, which oversees and controls the recruitment and training of paramilitary forces.

The Al Qaeda affiliated Islamic State of Iraq (ISI) re-emerged in April 2013 with a different name and acronym, commonly referred to as the Islamic State of Iraq and Syria (ISIS). The formation of a terrorist entity encompassing both Iraq and Syria was part of a US intelligence agenda. It responded to geopolitical objectives. It also coincided with the advances of Syrian government forces against the US sponsored insurgency in Syria and the failures of both the Free Syrian Army (FSA) and its various “opposition” terror brigades.

The decision was taken by Washington to channel its support (covertly) in favor of a terrorist entity which operates in both Syria and Iraq and which has logistical bases in both countries. The Islamic State of Iraq and al-Sham’s Sunni caliphate project coincides with a longstanding US agen