No city in Iraq is more symbolic of the criminal consequences of the US invasion of Iraq than Fallujah. Prior to 2003, the 300,000-strong, prosperous, predominantly Sunni Muslim community on the Euphrates River, one of humanity’s oldest continuous urban settlements, was known as the “city of mosques.” After 13 years of destruction at the hands of the US military and its client state in Baghdad, it is today a labyrinth of ruins, a city of the dead.

Following weeks of air strikes by US, British and Australian bombers, a combination of Iraqi government forces and Shiite militias is reportedly on the verge of a final offensive to seize back Fallujah from some 500 fighters of the Sunni-extremist Islamic State of Iraq and Syria (ISIS), which took control of the city in early 2014. Iraqi special forces units are accompanied by elite troops of the US, British and Australian militaries, who direct air strikes and ground artillery bombardments and provide tactical advice to Iraqi commanders. 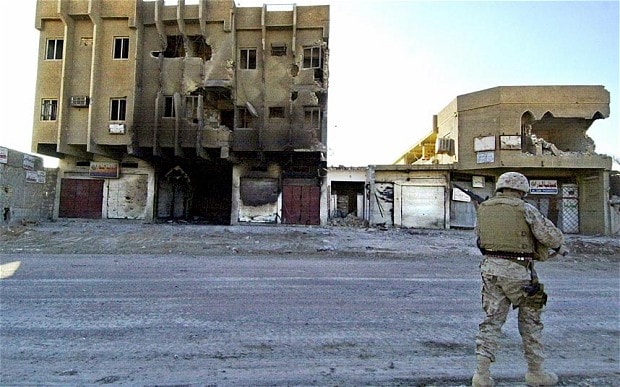 UN High Commissioner for Human Rights (UNHCR) Zeid Ra’ad al Hussein has issued urgent appeals concerning the fate of the estimated 50,000 civilians who are trapped in Fallujah, without food or water. Civilian deaths caused by the offensive have been justified in advance by the US-backed Iraqi government with allegations that the occupiers are using the population as “human shields.” ISIS is accused of murdering dozens of people who have attempted to flee.

Men and teenagers who do escape are being detained by Iraqi government and militia units. According to the UNHCR, they are being subjected to “physical violations and other forms of abuse, apparently in order to elicit forced confessions” of being ISIS members or supporters. The UNHCR has received unconfirmed accounts of at least 21 summary executions.

In the media coverage, the question as to how and why ISIS was able to gain control of the city two years ago is largely ignored. To the extent it is raised, the explanation given is Sunni resentment over the sectarian and discriminatory policies of the Shiite-dominated government— after the withdrawal of American troops in 2011. The Iraqi people as a whole are generally portrayed as incurably divided along Sunni, Shiite and Kurdish lines, incapable of living in harmony together and inherently attracted to extremist ethno-sectarian ideologies.

A review of the tortured history of Fallujah since 2003 makes clear that this narrative is a lie. The current situation in Iraq and neighbouring Syria is the outcome and continuation of the deliberate stoking of sectarian conflict by the American occupation for the purpose of dividing the Iraqi masses and cementing the US grip over the oil-rich Middle East.

After the illegal invasion of Iraq and overthrow of the Baathist regime of Saddam Hussein, Fallujah was the scene of one of the first widely reported crimes by American troops against Iraqi civilians. Two hundred youth demanding the reopening of their school were fired on by