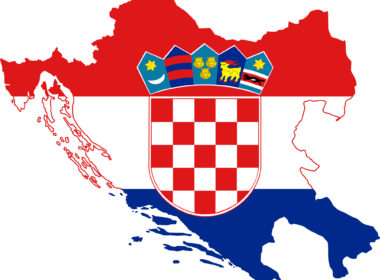 Back in February, we warned about the prospect of Israel selling F-16s to Croatia, a state in which WWII revisionism and Holocaust denial are running rampant, and memories of the Nazi puppet Independent State of Croatia are routinely glorified. In the meantime, that has become a done deal. But there is more. Not only will Israel sell half a billion dollars worth of fighter jets to Croatia, but on August 5, three Israeli F-16s, crewed by Israeli pilots, took part in a parade to celebrate the 23rd anniversary of the “Operation Storm,” in which more than 2,300 Serbs were killed, including more than 1,200 civilians, among which more than 500 women and 12 children, and which forced the exodus of a quarter million Serbs from their ancestral homes in this former Yugoslav republic, reducing their numbers from the pre-war 600,000 to fewer than 190,000 today. 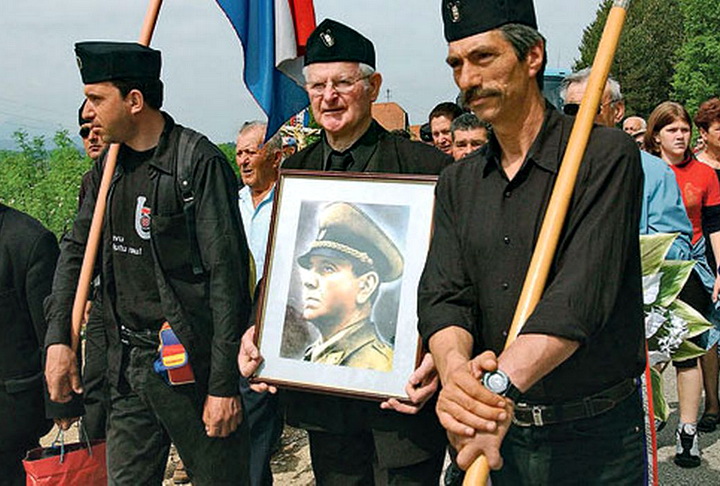 As the Serb civilians retreated, Croatian fighter planes bombed and strafed the refugee columns, killing many, even those that had already crossed into neighboring Bosnia-Herzegovina (B-H). Some of the refugees were met by Croatian mobs hurling rocks and concrete at them. Compiling accounts from various, mostly Western news reports, Gregory Elich put together a harrowing account of the Croatian military operation, with full US and NATO support:

“A UN spokesman said, ‘The windows of almost every vehicle were smashed and almost every person was bleeding from being hit by some object.’ Serbian refugees were pulled from their vehicles and beaten. As fleeing Serbian civilians poured into Bosnia, a Red Cross representative in Banja Luka (B-H) said, ‘I’ve never seen anything like it. People are arriving at a terrifying rate.’ Bosnian Muslim troops crossed the border and cut off Serbian escape routes. Trapped refugees were massacred as they were pounded by Croatian and Muslim artillery… The Croatian rampage through the region left a trail of devastation. Croatian special police units, operating under the Ministry of Internal Affairs, systematically looted abandoned Serbian villages. Everything of value – cars, stereos, televisions, furniture, farm animals – was plundered, and homes set afire. A confidential European Union report stated that 73 percent of Serbian homes were destroyed. Troops of the Croatian army also took part, and pro-Nazi graffiti could be seen on the walls of several burnt-out Serb buildings.

Massacres continued for several weeks after the fall of Krajina, and UN patrols discovered numerous fresh unmarked graves and bodies of murdered civilians. The European Union report states, ‘Evidence of atrocities, an average of six corpses per day, continues to emerge. The corpses, some fresh, some decomposed, are mainly of old men. Many have been shot in the back of the head or had throats slit, others have been mutilated… Serb lands continue to be torched and looted.’

Following a visit in the region a member of the Zagreb Helsinki Committee reported, ‘Virtually all Serb villages had been destroyed…. In a village near Knin, eleven bodies were found, some of them were massacred in such a way that it was not easy to see whether the body was male or female.’”

Croatia’s then president, notorious WWII revisionist Franjo Tudjman, triumphantly celebrated the expulsion of the Serbs and the fact that they “disappeared… as if they have never lived here… They didn’t even have time to take with them their filthy money or their filthy underwear!” This was the same man who had stated in 1990, at the beginning of his presidency, that he was “glad my wife is neither Serb nor Jew,” and, as the renowned Nazi hunter Simon Wiesenthal charged, claimed that only 900,000 Jews had perished in the Holocaust.

But this did not much faze Israeli officials playing their own version of the Art of the Deal. On August 5, 2018, as the Croatian daily Vecernji list gleefully announced, “Operation Storm has at last been given the stamp of approval of its allies – the USA. and Israel,” adding that the overflight by Israeli F-16s carrying the Star of David represented a “symbolic act of international recognition of the ethical soundness of military operation Storm,” which Croatia had been seeking “since August 1995.” Obviously, half a billion dollars buys quite a lot these days, Star of David and all, even for Holocaust deniers.

In a statement to the Times of Israel, Serbia’s ambassador in Tel Aviv said that his country was “deeply disappointed about the participation of Israeli pilots and fighter jets,” stressing that Operation Storm was a “pogrom” and “the biggest exodus of a nation since the Second World War,” and that Israel’s participation in Croatia’s victory celebration “is not a friendly gesture toward Serbia.”

On the other hand, according to the same report, Brigadier General (Ret.) Mishel Ben Baruch, head of the Israeli defense ministry’s International Defense Cooperation Directorate, said that it was “an honor to be able to participate” in the 23rd anniversary of Operation Storm. In addition, the Israeli embassy in Belgrade defended the participation of its warplanes in the celebration, stating that it was “entirely connected with the announced purchase” of the planes, that it carried “no political elements or any connection to the historic relations between Serbia and Croatia,” and that the “solid friendship” between Israel and Serbia “will never be jeopardized in any way.”

Serbian foreign minister Ivica Dachich was, however, not impressed, referring to the participation of Israeli jets as “immoral to their own people, the Jewish people, because so many Jews had perished in the Jasenovac [death camp], and the Croatian regime relativizes the Jewish victims,” adding that he “could not understand” the presence of the Israeli flag at the celebration, and that it would be a “mark” that the Israeli state would henceforth carry.

The Belgrade Jewish Community issued its own statement, saying that the celebration of Operation Storm was “neither the time, the place, nor the destination for Jewish pilots,” that “Jews remember their horrible suffering from World War II, when, just like the Serbs, we were victims of a terrible pogrom,” and that “absolutely no concession should be given, not even a thousandth of a millimeter, to the rehabilitation of either that or, unfortunately, the present-day glorification of the ‘success’ of Croatian soldiers.”

Croatia’s President in the 1990s

Efraim Zuroff, the chief Nazi-hunter of the Simon Wiesenthal Center, tweeted the following just before the event: “Very upset that Israeli AirForce jets will be flying in event to mark “Operation Storm” during which Croatia expelled 250,000 Serbs from their homes in Croatia. Until today no foreign country has ever participated!!”

Ironically, just days before the Israeli pilots joined in the celebration of Croatia’s “final solution” to its Serbian problem, Israeli President Reuven Rivlin paid an official visit to Croatia and, during a visit to the notorious Nazi-era death camp, Jasenovac, often referred to as “Croatia’s Auschwitz,” urged Croatia to “deal with its past… and not to ignore it,” (not so) subtly referring to, as Zuroff put it in a recent Jerusalem Post column, Croatia’s “failure to sincerely and honestly confront” the crimes of its Nazi-collaborating Ustasha movement and regime, which “has plagued Croatia since it obtained independence” in 1995.

Strangely, instead of continuing to hold Croatia to account, the Israeli government and armed forces have chosen to legitimize that country’s glorification of slaughter and ethnic cleansing, built on a foundation of Holocaust relativization and WWII revisionism. While helping fortify modern Croatia’s foundations, Israel’s leaders have just managed to shake their own.

About the author: Aleksandar Pavić is an independent analyst and researcher. 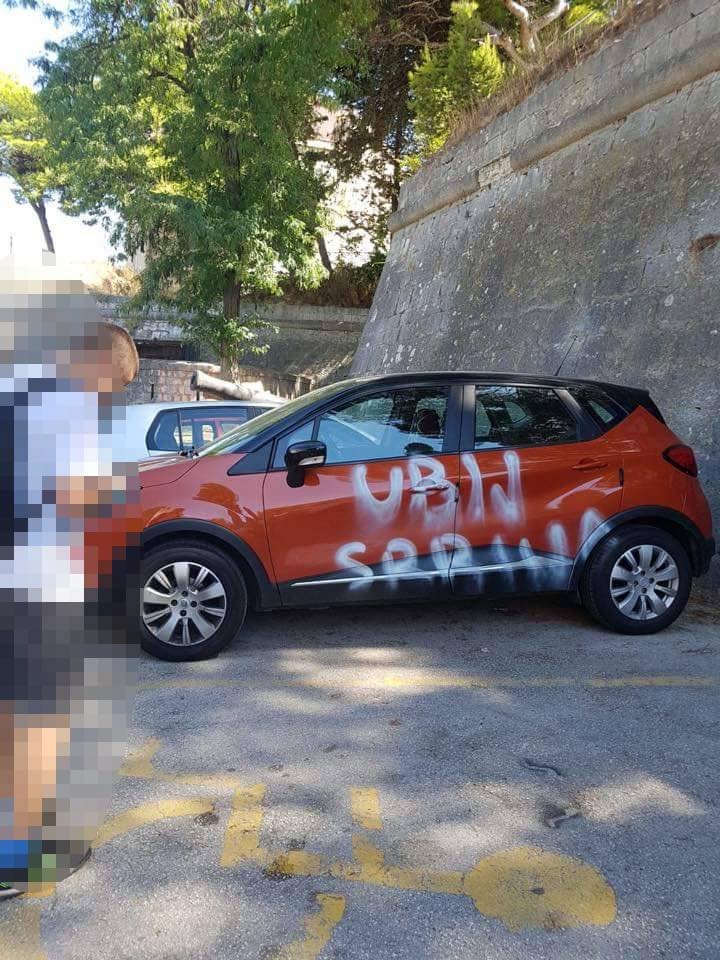 EuroCroatia in August 2018: “Kill the Serb” inscription on Serbia’s car-pate in Split 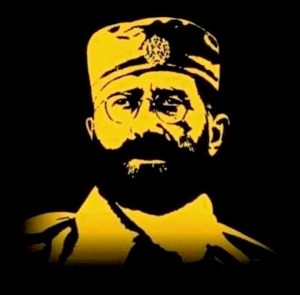