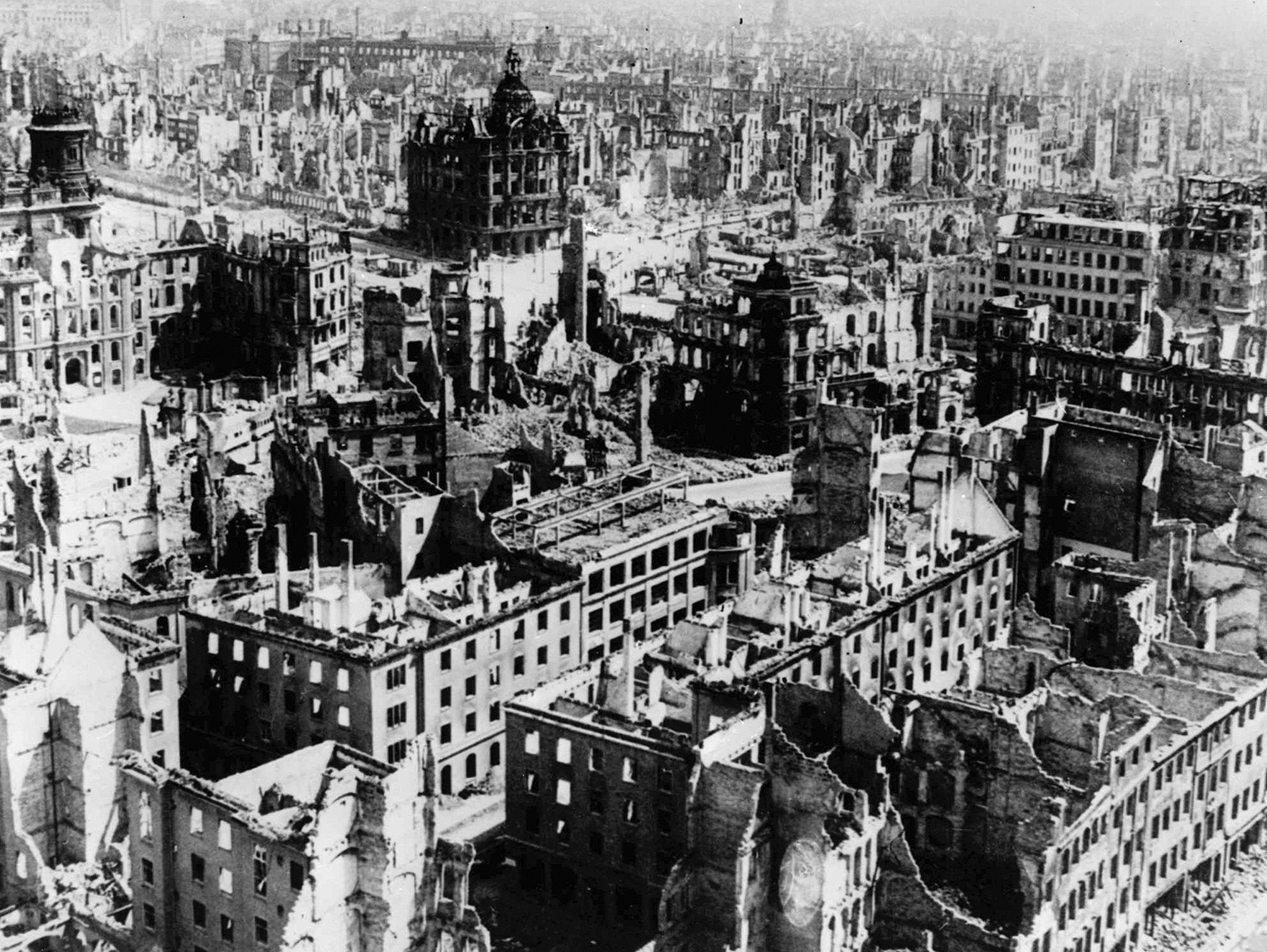 It is 70-years anniversary of the end of the WWII – the bloodiest and most horrible war ever fought in the human history. The war that caused creation of the UN in 1945 in order to protect the world from similar events in the future – a pan-global political-security organization of which first issued legal act was the UN Charter, which inspired the 1948 Geneva Conventions’ definition of genocide.

The Nüremberg and Tokyo Trials were organized as “The Last Battles” for justice as the first ever global trials for the war criminals and mass murderers including and the top-hierarchy statesmen and politicians. However, 70 years after the WWII the crucial moral question still needs a satisfactory answer: Are all the WWII war criminals faced the justice at the Nüremberg and Tokyo Trials? Or at least those who did not escape from the public life after the war. Here we will present only one of those cases from the WWII which has to be characterized as the genocide followed by the personalities directly responsible for it: The 1945 Dresden Massacre.

The 1945 Dresden Raid was surely one of the most destructive air-raids during the WWII but in the world history of massive military destructions and the war crimes against humanity too.[i] The main and most destructive air-raid was during the night of February 13th−14th, by the British Bomber Command when 805 bomber military crafts attacked the city of Dresden which up to that time was protected from similar attacks primarily for two reasons:

The main air-born raid was followed by three more similar raids in daylight but now by the U.S. 8th Air Force. The Allied (in fact, the U.K.−U.S.) Supreme Commander-In-Chief the U.S. a five-star General Dwight D. Eisenhower (1890−1969) was anxious to link the Allied forces with the very advancing Soviet Red Army in the South Germany. For that reason, Dresden suddenly became to be taken into consideration as a point of high strategic importance as a communication center, at least at the eyes of Eisenhower. However, at that time Dresden was known as a city that was overcrowded by up to 500,000 German refugees from the east. For the U.K.−U.S. Supreme Command Headquarters it was clear that any massive air-bombing of the city will cost many human lives and cause a human catastrophe. That was not primarily only on Eisenhower’s conscience to decide to launch massive air-born attacks on Dresden or not as we have not to forget that Eisenhower was only a military commander (a strateg in the Greek) but not and a politician. Unquestionably, the Dresden question in January−February 1945 was and of a political and human nature not only of military one. Therefore, together with a Supreme Commander-In-Chief of the Allied Forces a direct moral and human responsibility for the 1945 Dresden Massacre was on the British PM Winston Churchill (1874−1965) and the U.S. President Franklin D. Roosevelt (1882−1945) too. 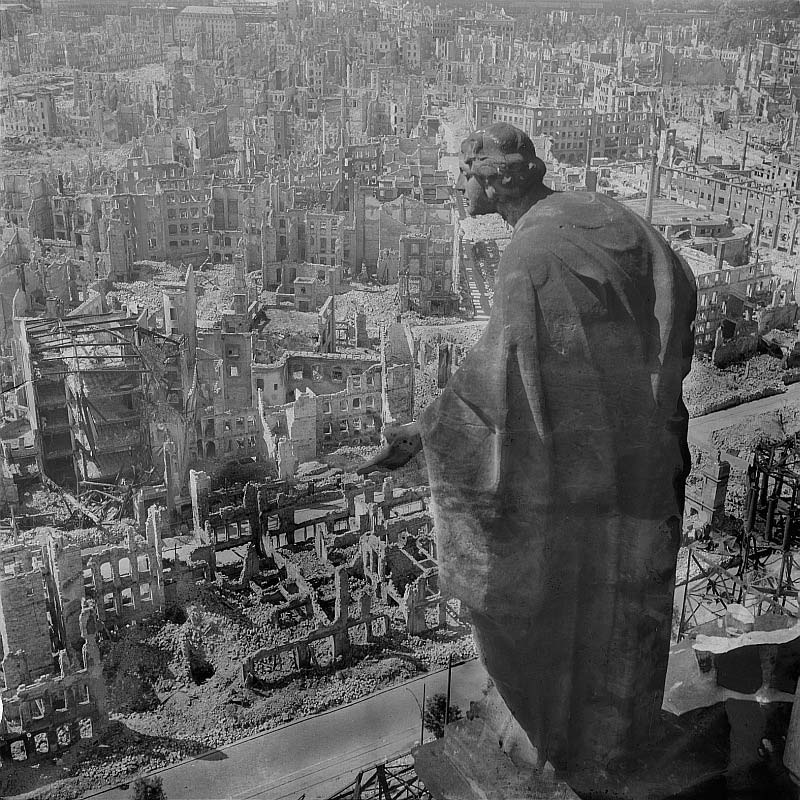 These three men, however, finally agreed that the inevitably very high casualties in Dresden might in the end, nevertheless, help to shorten the war, that from a technical point of view was true. During one night and one day of the raids there were over 30,000 buildings destroyed and the numbers of those who were killed in the bombing and the ensuing firestorm are still in dispute among the historians as the estimations go up to 140,000. Here it has to be noticed that if this highest estimation number is going to be true it means that during the 1945 Dresden Massacre were killed more people than in Hiroshima case from August 1945 (around 100,000 that was one third out of total Hiroshima’s pre-bombing population).

One person with direct responsibility for transforming Dresden into the open-air crematorium, as the city was bombed by forbidden flammable bombs for massive destructions (Saddam Hussein was attacked in 2003 by the NATO’s alliance under the alleged and finally false accusation to possess exactly such weapons – WMD) is the “Bomber Harris” – a commander of the British Royal Air-Forces during the Dresden Raid. The “Bomber Harris” was in fact Arthur Travers Harris (1892−1984), a Head of the British Bomber Command in 1942−1945. He was born in Cheltenham, joined the British Royal Flying Corps in 1915, before fighting as a solder in the South-West Africa. He became a Commander of the Fifth Group from 1939 till 1942 when he became the Head of this Group (Bomber Command). The point is that it was exactly Arthur Travers Harris who stubbornly required and defending the massive area bombing of Germany under the idea that such practice will bring the total destruction of Germany (including and civil settlements) that would finally force Germany to surrender  without involving of the Allied forces into the full-scale overland military invasion. The crucial point is that this “Bomber Harry’s” strategy received a full support by the British PM Winston Churchill who, therefore, became a politician who blessed and legitimized massive aerial massacres in the legal form of genocide as it was described in the post-WWII Charter of the UNO and other international documents on protection of human rights (ex. the 1949 Geneva Conventions). Nevertheless, there were the “Bomber Harry”, Dwight Eisenhower, Franklin D. Roosevelt and Winston Churchill who transformed the bombing of selected targets as transport systems, industrial areas or oil refineries into the massive aerial destruction of the whole urban settlements with transforming them into the open-air crematoriums like it was done for the first time in history with Dresden – a city with a rare historical heritage (today pre-war Dresden would be on the UNESCO list of protected places of the world’s heritage) but flattened during one night and one day.[iii]

This successful practice became very soon followed by the Allied forces in the cases of other German cities,[iv] like Würtzburg – a tightly packed medieval housing city that exploded in a firestorm in March 1945 in one night with 90% of destroyed city-space which had no strategic importance.[v] However, a strategic bombing of the urban settlements in the WWII reached its peak by destructions of  Hiroshima and Nagasaki under the order by the U.S. President (Democrat) Harry Truman – the “Atomic Harry” (1884−1972) who authorized the dropping of the atomic bombs over these two Japanese cities in order to end the war against Japan without further loss of the U.S. military troops, insisting on unconditional surrender of Japan.[vi]

Surely, one of the most obvious results of WWII was:

“its unparalleled destructiveness. It was most visible in the devastated cities of Germany and Japan, where mass aerial bombing, one of the major innovations of the Second World War, proved much more costly to life and buildings than had been the bombing of Spanish cities in the Spanish civil war”.[vii]

For that and other reasons, we believe that many Allied military and civil top decision-making personalities from the WWII should have been indicted at the Nüremberg and Tokyo Trials together with Hitler, Eichmann, Pavelić and many others. However, it is old truth that the victors are writing history and re-writing historiography. Therefore, instead to see Dwight Eisenhower, Winston Churchill, Franklin D. Roosevelt (FDR), Harry Truman or Arthur Travers Harris at the Nüremberg and Tokyo Trials’ courtrooms as indicted on such charges as crimes against humanity and genocide as were the German Nazi defendants, who included NSDAP’s officials and high-ranking military officers along with the German industrialists, lawmen and doctors, we are even 70 years after the WWII reading and learning politically whitewashed and embellished biographies of those war criminals who destroyed Dresden, Hiroshima or Nagasaki as national heroes, freedom fighters and democracy protectors.[viii] For instance, in any official biography of Winston Churchill is not written that he is responsible for the ethnic cleansing of the German civilians in 1945 but we know that the British PM clearly promised to the Poles to get after the war ethnically cleansed territory from the Germans.[ix]

If the Nüremberg Trial, 1945−1949 was “The Last Battle” for justice,[x]then it was incomplete. Moreover, two the most ardent killers of Dresden – Churchill and Eisenhower were granted after the war by the second premiership and double-term presidentship, respectively, in their countries.

[i] On this issue, see more in [L. B. Kennett, A History of Strategic Bombing: From the First Hot-AirBaloons to Hiroshima and Nagasaki, Scribner, 1982].

Originally written in May 2015.