Throughout the past decade, the UN General Assembly Third Committee has adopted the resolution: “Combating Glorification of Nazism, neo-Nazism and other practices that contribute to fueling contemporary forms of racism, racial discrimination, xenophobia and related intolerance.” 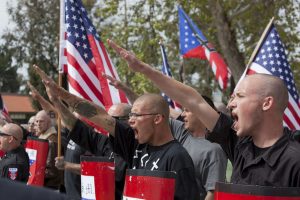 Every year the resolution is adopted by an overwhelming majority of UN member states, while the European Union, which, as the battleground of Nazism should have supported the resolution, merely abstains, and their fence-straddling raises disturbing questions about their actual tendencies. Japan’s abstention raises equally disturbing questions. The United States has consistently, and shockingly, opposed this resolution.

“Recognizing with deep concern the alarming increase in instances of discrimination, intolerance and extremist violence motivated by anti-Semitism, Islamophobia and Christianophobia and prejudices against persons of other ethnic origins, religions and beliefs,”

“Mindful of the horrors of the Second World War, and stressing in this regard that the victory over Nazism in the Second World War contributed to establishing the conditions for the creation of the United Nations, designed to prevent future wars and save succeeding generations from the scourge of war.”

6. “Emphasizes once more the recommendation of the Special Rapporteur that “any commemorative celebration of the Nazi regime, its allies and related organizations, whether official or unofficial, should be prohibited by States, also emphasizes that such manifestations do injustice to the memory of the countless victims of the Second World War and negatively influence children and young people, and stresses in this regard that it is important that States take measures, in accordance with international human rights law, to counteract any celebration of the Nazi SS organization and all its integral parts, including the Waffen SS, and that failure by States to effectively address such practices is incompatible with the obligations of States Members of the United Nations under its Charter.”

“Notes with concern the increase in the number of racist incidents worldwide, including the rise of skinhead groups, which have been responsible for many of these incidents, as well as the resurgence of racist and xenophobic violence, targeting, inter alia, persons belonging to national or ethnic, religious and linguistic minorities or on any other grounds, including arson attacks on houses and vandalization of schools and places of worship.”

Perhaps the answer to the US position became visible with the election of a president of a failing capitalist economy, who captured the rage and frustration of an increasingly impoverished citizenry, and appears to condone the most loathsome scapegoating of minorities in America (and elsewhere). This reached a boiling point in Charlottesville in mid -August this year, during a rally of white supremacists and neo-Nazis, publicized, among others by Mike Enoch, who refers to African Americans as “animals,” extols fascism, is a cohort of Klu Klux Klan devotee David Duke and white-nationalist James Alex Fields, who drove a car into a crowd of counter-protesters, killing Heather Heyer.

The President, to the shock and embarrassment of his allies, stated that there are some “very, very fine people” present at the neo-Nazi rally, though his daughter, Ivanka, a converted orthodox Jew, tweeted:

“There should be no place in society for racism, white supremacy and neo-Nazis.”

“The film understands and strives to dramatize racism not as a matter of bad personal attitudes or equal and opposite prejudices, but rather as a structuring fact of American life, an apparatus of power, exclusion and control wielded against ‘them.’”

Although “Detroit” focuses upon an event in 1967, the Algiers Motel incident, simultaneously another film, “Whose Streets” appeared, and also quickly disappeared.

“Whose Streets” documents prevailing rampant racism, the recent murder of innocent unarmed black men by sadistic racist police armed with lethal weapons: the list is too long – Ferguson, Freddie Gray, Eric Garner, etc. etc. This is the current criminal climate. The murder of Heather Heyer should be included, because neo-Nazism rears its bestial head too often in times of economic crisis, a crazed and enraged expression of powerlessness, which, with an increased militarization of police, sadistically targets the homeless, the vulnerable, the voiceless, the most impoverished.

The Holocaust museum in Washington, D.C. reveals that 23 million Germans faced starvation at the time Hitler was voted inter power.