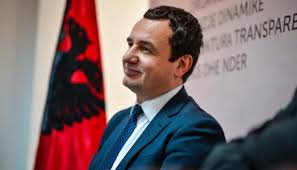 Albin Kurti is on the verge of becoming the next Prime Minister of Kosovo after he and opposition chairman Isa Mustafa confirmed last week that the two rival political parties had made progress to create a coalition government. Mustafa said that Kurti can rightfully become the next Prime Minister if he can convince the three remaining parliamentarians, representing the Bosniak, Turkish and Roma minorities to enter a coalition – and it appears they will.

What does the accession of Albin Kurti mean for the future of Kosovo?

Kurti does not recognize the flag and anthem of Kosovo, as well as the Kosovar national identity. At first, this actually sounds positive and perhaps he is a leader who wants to reconcile with Belgrade and bring Kosovo, considered Serbia’s heartland, back under Serbian administration. However, this could not be further from the truth as he is an Albanian ultra-nationalist and believes Kosovo should be annexed by Albania. Essentially, he is Kosovo’s man to push forward the project for a “Greater Albania.”

As part of his platform, he argues that the constitution of Kosovo should be changed so that national identity is restored to Albanians in Kosovo. Essentially, he rejects the Kosovar nationality as defined by the proposal of Finnish Nobel “Peace” Prize winning Marti Ahtisaari, and takes on the Albanian identity openly. Kurti does not differentiate between nation and ethnicity as he sees Kosovo as an extension of Albania. The nation and the state are not the same.

If Kurti becomes Prime Minister of Kosovo, one pressing question is which state will swear allegiance to – Albania or Kosovo? Most Kosovars consider themselves to be Albanian, and usurpingly the overwhelming majority of Kosovars support the idea of a “Greater Albania.”

Kurti never hid his aspirations for union with Albania and has not changed it since he has been active in both society and politics. And he is certainly not alone as Kosovars do not have their independent history, and rather their traditions, culture, religious heritage, language and customs belong to the ethnic identity of Albanians, who already have their own state – Albania.

The name “Kosovars”, which they received as a gift from the West through Ahtisaari’s plan, was to define them as a new nation, independent of the already existing Albanian one. But it’s not so easy to do. Because the only true asset of the “Kosovar nation” is the terrorist Kosovo “Liberation” Army (KLA), and their only national hero is terrorist Adem Jashari. In other words – their so-called history begins sometime in the mid-1990s.

And that legacy of the KLA includes the destruction of ancient Serbian Orthodox churches, rape and ethnic cleansing, with many of the former leaders of the KLA turning Kosovo today into a heroin ‘smugglers paradise,’ and hub for human trafficking, organ harvesting and arms trafficking. The Kosovo War Crimes Tribunal could very well be shut down soon if Kurti, as is expected, will officially become leader of the illegitimate state.

The Tribunal against the KLA, more specifically, the Specialized Chambers and the Specialized Prosecutor’s Office of Kosovo based in The Hague (Special War Crimes Tribunal in Kosovo), expires next year, if judged by the 2015 constitutional amendment that formed the institution.

The institution has not filed any charges so far, though it has heard about 100 witnesses, according to Kosovo, including Ramush Haradinaj, a former prime minister.  Kurti, who is likely to succeed Haradinaj, has already announced that the work of “this unusual building of justice,” as the court has called it, will be discussed in two places: in the Kosovo parliament and in Brussels. In other words, can he terminate the treaty with the EU, since he is one of the biggest opponents of its establishment? This can be problematic as it is located in The Hague, but was formed with the approval of the Kosovo Assembly.

Depsite the evidence provided by Serbian prosecutors to the court, the occupying government in Pristina does not want to cooperate, so the trials never eventuate. Many in Kosovo have opposed the formation of the court, as it deals only with allegations in Dick Marty’s report, which does not even mention Serbian crimes. The Hague Specialized Chambers are a replica of the Kosovo justice system in a small way. They are established at every level of the judicial system in Kosovo, from the Basic Court to the Constitutional Court and employ only international staff. The Court is mainly funded by the European Union and was formed at the insistence of the international community. He investigates alleged crimes by the KLA against ethnic minorities and political rivals.

So then, whose court is this?

This judicial institution has a mandate for alleged crimes against humanity, war crimes and other crimes related to the allegations in Dick Marty’s report, mainly organ harvesting, which were committed between January 1998 and December 2000 – but continues to this day. Kosovo President Hashim Thaçi has repeatedly said the formation of a court was needed to “clean up our fight and prove that we have nothing to hide, but also to preserve historic and strategic allies, the US, the EU and NATO.”

With the likelihood of Kurti becoming the next Prime Minister, we can now expect the project for a Greater Albania be accelerated and him providing protection for KLA terrorists from facing justice. Even if Kosovo and Albania may not unite, or attempt to, it will likely mean that more countries will renounce their recognition of Kosovo for their blatant attempt at escalating a volatile issue. Over 10 countries have already renounced their recognition of Kosovo, bringing the total percentage of UN member countries who recognize Kosovo to 51% and quickly reducing.

About the author: Paul Antonopoulos, Research Fellow at the Center for Syncretic Studies