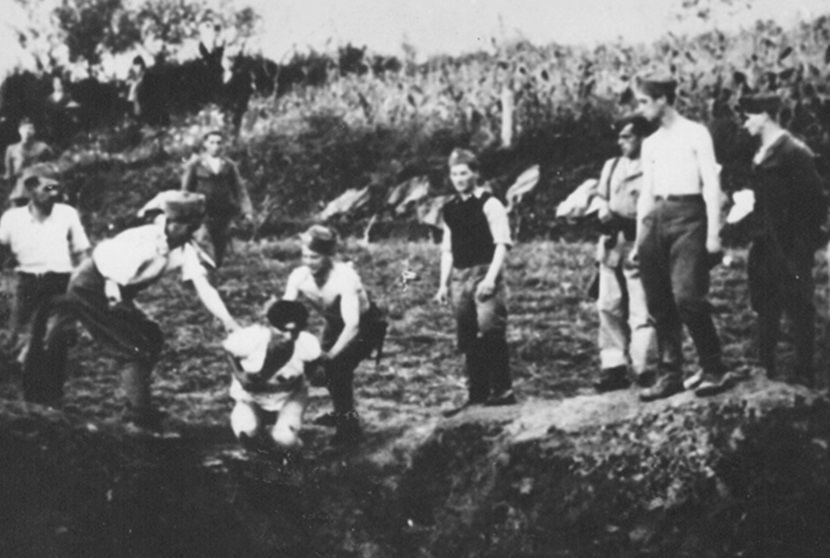 The Serb holocaust during the WWII in the Independent State of Croatia is not a misnomer, an accusation, and even less a speculation. It is an historical fact. Rabid nationalism and religious dogmatism were its two main ingredients. During the existence of Croatia as an independent Catholic State, over 700,000 men, women and children perished. Many were executed, tortured, died of starvation, buried alive, or were burned to death. Hundreds were forced to become Catholic. Catholic padres ran concentration camps; Catholic priests were officers of the military corps which committed such atrocities. 700,000 in a total population of a few million, proportionally, would be as if one-third of the USA population had been exterminated by a Catholic militia (Avro Manhattan).

This is the “hidden Holocaust” which, though well-known to scholars, is rarely, mentioned elsewhere, presumably because of the active involvement of the Catholic Church, which used the terror to win an estimated 200,000 to 300,000 new converts. The current lawsuit is on behalf of three groups of victims in the Croatian Holocaust: the Serbs, who were obliged to wear blue armbands marked with a “P” for Orthodox (Pravoslavac), the Jews, who had to wear the Star of David, and the Roma (whose extermination by the Nazis is called the Porajmos). The suit no longer involves the means by which the funds were obtained, only their disposal. However, no serious historian disputes the claimants’ account of the origin of the “victim gold”:

The Serbs, Jews, and the Roma were slaughtered in their villages after unspeakable tortures or burned alive in their churches. Those that were not murdered were expelled to Serbia proper after being despoiled of all their property or forcibly converted to the Roman Catholic faith by Franciscan and Roman Catholic clergy. Many were used as slave labourers. The remaining people were taken to concentration camps where the majority perished.

The Führer (Poglavnik) Pavelic in the military boots beloved of fascist leaders is surrounded by Franciscans. “Upon the establishment of the Ustasha Regime[led by Pavelic] individual Franciscan priests deserted their vocations and incited attacks on Serb and Roma settlements, tortured, killed and expropriated their victims in dozens of villages in Croatia and Bosnia. […] OFM [the Franciscans] did not actively seek out and punish most priests associated with the Ustasha during the Second World War despite knowledge of their activities.”

And the Vatican did nothing.

From stolen gold and money, the Vatican enabled Nazis to escape to Argentina, buy so-call “ratlines”.

During World War II, on 6 April 1941, Yugoslavia was invaded by Nazi Germany, who established the Ustaše-led Independent State of Croatia. As archbishop of the puppet state’s capital, Stepinac had close associations with the Ustaše leaders during the Nazi occupation, had issued proclamations celebrating the NDH, and welcomed the Ustaše leaders. Also, he was a military vicar and a deputy of “parliament” of the so-called Independent State of Croatia.

Despite opposition of the international community, the Vatican and Germany were the first to recognize the independence of Croatia, 1991-2. The historical revisionism triumphed in the Balkans.
In August 1995, Croatia expelled the remaining Serbs. The second part of the Ustasha’s plan for resolving the Serbian question was fulfilled.