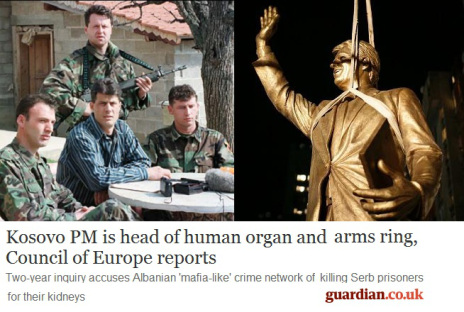 President Bill Clinton’s favorite freedom fighter just got indicted for mass murder, torture, kidnapping, and other crimes against humanity. In 1999, the Clinton administration launched a 78-day bombing campaign that killed up to 1500 civilians in Serbia and Kosovo in what the American media proudly portrayed as a crusade against ethnic bias. That war, like most of the pretenses of U.S. foreign policy, was always a sham.

Kosovo President Hashim Thaci was charged with ten counts of war crimes and crimes against humanity by an international tribunal in The Hague in the Netherlands. It charged Thaci and nine other men with “war crimes, including murder, enforced disappearance of persons, persecution, and torture.” Thaci and the other charged suspects were accused of being “criminally responsible for nearly 100 murders” and the indictment involved “hundreds of known victims of Kosovo Albanian, Serb, Roma, and other ethnicities and include political opponents.”

Hashim Thaci’s tawdry career illustrates how anti-terrorism is a flag of convenience for Washington policymakers. Prior to becoming Kosovo’s president, Thaci was the head of the Kosovo Liberation Army (KLA), fighting to force Serbs out of Kosovo. In 1999, the Clinton administration designated the KLA as “freedom fighters” despite their horrific past and gave them massive aid. The previous year, the State Department condemned “terrorist action by the so-called Kosovo Liberation Army.” The KLA was heavily involved in drug trafficking and had close to ties to Osama bin Laden.

But arming the KLA and bombing Serbia helped Clinton portray himself as a crusader against injustice and shift public attention after his impeachment trial. Clinton was aided by many shameless members of Congress anxious to sanctify U.S. killing. Sen. Joe Lieberman (D-CN) whooped that the United States and the KLA “stand for the same values and principles. Fighting for the KLA is fighting for human rights and American values.” And since Clinton administration officials publicly compared Serb leader Slobodan Milošević to Hitler, every decent person was obliged to applaud the bombing campaign.

Both the Serbs and ethnic Albanians committed atrocities in the bitter strife in Kosovo. But to sanctify its bombing campaign, the Clinton administration waved a magic wand and made the KLA’s atrocities disappear. British professor Philip Hammond noted that the 78-day bombing campaign “was not a purely military operation: NATO also destroyed what it called ‘dual-use’ targets, such as factories, city bridges, and even the main television building in downtown Belgrade, in an attempt to terrorize the country into surrender.”

NATO repeatedly dropped cluster bombs into marketplaces, hospitals, and other civilian areas. Cluster bombs are anti-personnel devices designed to be scattered across enemy troop formations. NATO dropped more than 1,300 cluster bombs on Serbia and Kosovo and each bomb contained 208 separate bomblets that floated to earth by parachute. Bomb experts estimated that more than 10,000 unexploded bomblets were scattered around the landscape when the bombing ended and maimed children long after the ceasefire.

In the final days of the bombing campaign, the Washington Post reported that “some presidential aides and friends are describing Kosovo in Churchillian tones, as Clinton’s ‘finest hour.’” The Post also reported that according to one Clinton friend “what Clinton believes were the unambiguously moral motives for NATO’s intervention represented a chance to soothe regrets harbored in Clinton’s own conscience…The friend said Clinton has at times lamented that the generation before him was able to serve in a war with a plainly noble purpose, and he feels ‘almost cheated’ that ‘when it was his turn he didn’t have the chance to be part of a moral cause.’” By Clinton’s standard, slaughtering Serbs was “close enough for government work” to a “moral cause.”

Shortly after the end of the 1999 bombing campaign, Clinton enunciated what his aides labeled the Clinton doctrine: “Whether within or beyond the borders of a country, if the world community has the power to stop it, we ought to stop genocide and ethnic cleansing.” In reality, the Clinton doctrine was that presidents are entitled to commence bombing foreign lands based on any brazen lie that the American media will regurgitate. In reality, the lesson from bombing Serbia is that American politicians merely need to publicly recite the word “genocide” to get a license to kill.

After the bombing ended, Clinton assured the Serbian people that the United States and NATO agreed to be peacekeepers only “with the understanding that they would protect Serbs as well as ethnic Albanians and that they would leave when peace took hold.” In the subsequent months and years, American and NATO forces stood by as the KLA resumed its ethnic cleansing, slaughtering Serb civilians, bombing Serbian churches and oppressing any non-Muslims. Almost a quarter-million Serbs, Gypsies, Jews, and other minorities fled Kosovo after Mr. Clinton promised to protect them. By 2003, almost 70 percent of the Serbs living in Kosovo in 1999 had fled, and Kosovo was 95 percent ethnic Albanian.

But Thaci remained useful for U.S. policymakers. Even though he was widely condemned for oppression and corruption after taking power in Kosovo, Vice President Joe Biden hailed Thaci in 2010 as the “George Washington of Kosovo.” A few months later, a Council of Europe report accused Thaci and KLA operatives of human organ trafficking. The Guardian noted that the report alleged that Thaci’s inner circle “took captives across the border into Albania after the war, where a number of Serbs are said to have been murdered for their kidneys, which were sold on the black market.” The report stated that when “transplant surgeons” were “ready to operate, the [Serbian] captives were brought out of the ‘safe house’ individually, summarily executed by a KLA gunman, and their corpses transported swiftly to the operating clinic.”

Despite the body trafficking charge, Thaci was a star attendee at the annual Global Initiative conference by the Clinton Foundation in 2011, 2012, and 2013, where he posed for photos with Bill Clinton. Maybe that was a perk from the $50,000 a month lobbying contract that Thaci’s regime signed with The Podesta Group, co-managed by future Hillary Clinton campaign manager John Podesta, as the Daily Caller reported.

Clinton remains a hero in Kosovo where a statue of him was erected in the capital, Pristina. The Guardian newspaper noted that the statue showed Clinton “with a left hand raised, a typical gesture of a leader greeting the masses. In his right hand he is holding documents engraved with the date when NATO started the bombardment of Serbia, 24 March 1999.” It would have been a more accurate representation to depict Clinton standing on a pile of corpses of the women, children, and others killed in the U.S. bombing campaign.

In 2019, Bill Clinton and his fanatically pro-bombing former Secretary of State, Madeline Albright, visited Pristina, where they were “treated like rock stars” as they posed for photos with Thaci. Clinton declared, “I love this country and it will always be one of the greatest honors of my life to have stood with you against ethnic cleansing (by Serbian forces) and for freedom.” Thaci awarded Clinton and Albright medals of freedom “for the liberty he brought to us and the peace to entire region.” Albright has reinvented herself as a visionary warning against fascism in the Trump era. Actually, the only honorific that Albright deserves is “Butcher of Belgrade.”

Clinton’s war on Serbia was a Pandora’s box from which the world still suffers. Because politicians and most of the media portrayed the war against Serbia as a moral triumph, it was easier for the Bush administration to justify attacking Iraq, for the Obama administration to bomb Libya, and for the Trump administration to repeatedly bomb Syria. All of those interventions sowed chaos that continues cursing the purported beneficiaries.

Bill Clinton’s 1999 bombing of Serbia was as big a fraud as George W. Bush’s conning this nation into attacking Iraq. The fact that Clinton and other top U.S. government officials continued to glorify Hashim Thaci despite accusations of mass murder, torture, and body trafficking is another reminder of the venality of much of America’s political elite. Will Americans again be gullible the next time that Washington policymakers and their media allies concoct bullshit pretexts to blow the hell out of some hapless foreign land?

About the author: Jim Bovard is the author of Public Policy Hooligan (2012), Attention Deficit Democracy (2006), Lost Rights: The Destruction of American Liberty (1994), and 7 other books. He is a member of the USA Today Board of Contributors and has also written for the New York Times, Wall Street Journal, Playboy, Washington Post, and other publications. His articles have been publicly denounced by the chief of the FBI, the Postmaster-General, the Secretary of HUD, and the heads of the DEA, FEMA, and EEOC and numerous federal agencies.