On February 2nd, 1943, the 6th German Army, under the command of Field Marshall Von Paulus, and elements of the 4th Panzer Army, surrendered to the Red Army at Stalingrad. This stunning victory is considered the turning point in the war in Europe, heralding the defeat of fascist Germany.

That defeat came on May 2ndth 1945, when the German forces in Berlin, the capital of the Third Reich, surrendered to the forces of the Red Army that had captured the city. On May 9th the official act of surrender of the German government and military forces took place in Berlin when the Germans surrendered to the Soviet commander, Marshal Zhukov, a surrender witnessed by representatives of the American, British and French forces. This was the end of the war in Europe.

Surrenders of elements of the German armies in the Italy and Austria on May 2nd and German forces in northern Europe, on May 7th, at first claimed by the western allies to be the official surrender of Germany, were not recognised as such by the Soviet government, since they were in violation of the agreement of the European Advisory Committee of the three Big Powers, that was finalised in March, 1944. That agreement required that the surrender would be one event, would be of the German government itself, not just of army elements in impossible positions, and was to take place at the seat of government from which German aggression had been launched, Berlin.

The western allies had no choice but to agree, and to regard the May 9th ceremony as the official act of surrender of the German government. But it was clear even then that the western allies had tried to arrange a separate peace with the Germans while the Soviets were still fighting and it was made very clear that the Americans and British wanted to steal the show from the Russians. Now 70 years later, the propaganda machine in the west once again claims that the earlier date was the end of the war in Europe.

It is well to remember the significance of this attempt by the Americans and British to conclude a separate peace with the Nazis, while Soviet forces were still engaged in the fierce Battle of Berlin and what a betrayal it was of the promised solidarity between the nations fighting against fascist aggression to which the Soviet forces at Stalingrad had dealt the fatal blow.

During one of his fireside chats on American radio on July 28, 1943, American President Roosevelt said,

“The world has never seen greater devotion, determination and self-sacrifice than have been displayed by the Russian people…under the leadership of Marshal Joseph Stalin. With a nation, that in saving itself, is thereby helping to save all the world from the Nazi menace, this country of ours should always be glad to be a good neighbour and a sincere friend to the world of the future.”

Fine words, and true, but where is the good neighbour now?

Instead of international solidarity between the victors and recognition of the sacrifice of the Russian people that Roosevelt praised, the NATO countries now refuse to attend the Moscow Victory Parade commemorating the defeat of Nazi Germany. But why do they insult the one nation that suffered the most, sacrificed the most, fought the hardest and won the greatest victories against the fascists? Is it really about Ukraine? The answer is simply that they see the defeat of fascist Germany not as a victory over fascism but as a failure of the western attempt to crush Russia.

We must also remember that NATO includes the occupied German state whose forces attacked the Soviet Union on June 22nd 1941, a state that still has no sovereignty and is still occupied by American forces two decades after Russian forces left, and whose leaders, now revealed as permitting American intelligence to spy on German companies for economic advantage, are evidently in the pocket of the American government.

It includes Britain, whose war time leader, Winston Churchill, echoing public calls by American General Patton, proposed an attack on the Soviet forces in Europe to take place in July 1945, using combined American-British-Canadian forces as well as the remaining German armies. The plan even included the use of nuclear weapons. It was called Operation Unthinkable, but it was clearly very thinkable and was a plan to pick up where the Nazis had failed, to subjugate Russia, and was only shelved when analysis proved that Soviet forces were too strong to overcome.

It is clear that the fire bombings of Dresden and Tokyo and the nuclear attacks on Japan, in which hundreds of thousands of civilians were incinerated by the Americans and British, were meant as demonstrations to the Soviet Union of their power, as an attempt to intimidate and subdue their supposed ally before the war with Germany was even concluded. The threat of a continued world war against Russia was made with the attacks on those defenceless cities. But with Operation Unthinkable put on hold and the formation of the Warsaw Pact as a defense against the NATO threat, the war against Russia was continued using other means and came to be called the Cold War, a political euphemism, since Soviet forces fought against the NATO allies directly in Korea and Vietnam and by proxies in many countries seeking liberation from western colonialism in Asia, Africa and Afghanistan.

We must also remember that in 1939, when Hitler attacked Poland, both Britain and France reneged on their promise to Poland to defend it in the event of an attack by Germany because they wanted German forces to be able to move right up to the borders of the Soviet Union to make it easier for Germany to launch its invasion of Russia just two years later. The so-called phoney war after the fall of Poland until the May, 1940 German attack on France, gave crucial time to Germany to advance its plans to attack Russia.

The entire focus of the NATO alliance, formed immediately after the defeat of Germany, has been on war with Russia and, since the fall of the Soviet Union and the weakening of Russian power, the NATO alliance has steadily advanced its attack position with a series of wars from Yugoslavia to Georgia and Ukraine, from Chechnya to Iraq, Syria, Libya and Afghanistan, all designed to eliminate Russian allies and to put NATO forces right up against Russian territory on its southern and western flanks.

In a document known as the Atlantic Charter, drafted on a battleship off the coast of Newfoundland in the middle of 1941, the Americans and British promised that the goals of the world war were not to increase their territories, but to guarantee the self-government of peoples, free trade, global cooperation to secure better economic and social conditions for all, freedom from fear and want, freedom of the seas and abandonment of the use of force as an instrument of policy, and disarmament. The Soviet Union adhered to these principles in the January 1, 1942 Declaration of the United Nations.

But aside from the relentless forcing of “free trade” treaties down workers throats across the world, which really means the freedom to exploit workers everywhere for the profit of a few corporations, the western signatories have violated every one of the clauses in the Atlantic Charter document.

The world was assured that there would be peace but they have given us nothing but 70 years of war. They promised us freedom from want but have relentlessly tried to destroy any government that protects the rights of workers, and poverty has increased dramatically in every western country since the fall of the Soviet Union.

Nations that were promised liberation at the end of the world war, had to fight these same powers to attain that justice. Some like China and Vietnam, Cuba, and North Korea, succeeded after long and bitter fighting, while the struggles of many others were crushed or subverted.

In Ukraine now we are witnessing a national army and formations of outright fascist militias, the new SS, firing on, and shelling fellow citizens who protest the lack of legality of the government and the American agenda of using it as a base to attack Russia. The interests of the War Party in the west prevail over the basic demands of their peoples for social and economic justice, and freedom from fear and war.

The whole world owes the peoples of the Soviet Union, of the Russian Federation, a debt that can never be repaid for their defeat of fascism in Europe. They suffered the heaviest losses, the most destruction, the heaviest burden of fighting the Nazi war machine.

The refusal of NATO leaders to attend the Moscow ceremonies on May 9th is an insult to history, to the sacrifices of scores of millions of Russians, and is tantamount to a repudiation of the principles of the Atlantic Charter and the Charter of the United Nations. But it is more than that. It is proof, if ever it was needed, that the main objective of the world war in Europe was the crushing of Russia for the benefit of the three powers, the USA, Britain and Germany. While scrapping among themselves to see who would be top dog on the world street, they were united in their desire to subdue Russia to their will. This objective was long held in check by Soviet power. The fall of the Soviet Union and its replacement by a government initially composed of compradors for the west gave the Americans and their allies the impression that they had succeeded in bringing Russia under their complete domination. But the rise of new leaders in Russia, reinvigorating Russian sovereignty and reviving Russian power and prestige in the world has angered these wolves of war who now circle, and harass, waiting for the opportunity to strike. 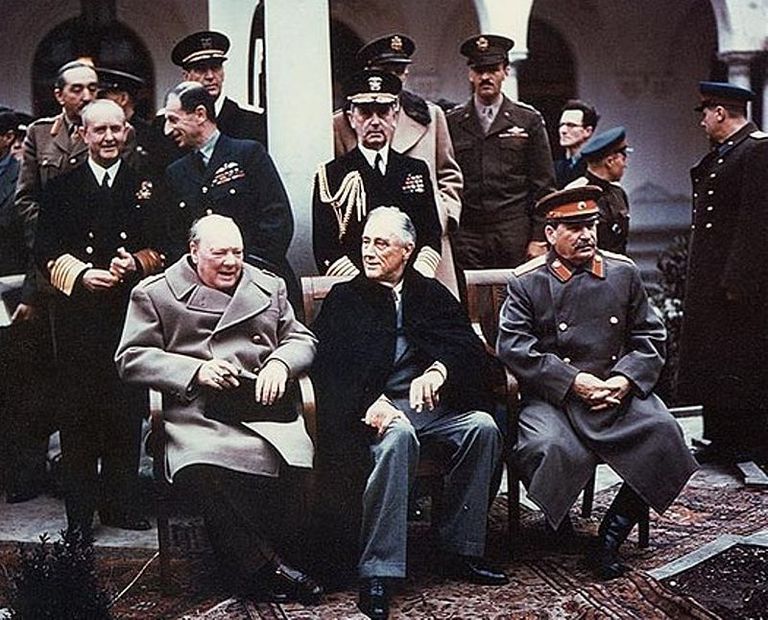 About the author: Christopher Black is an international criminal lawyer based in Toronto, he is a member of the Law Society of Upper Canada and he is known for a number of high-profile cases involving human rights and war crimes, especially for the online magazine “New Eastern Outlook”.