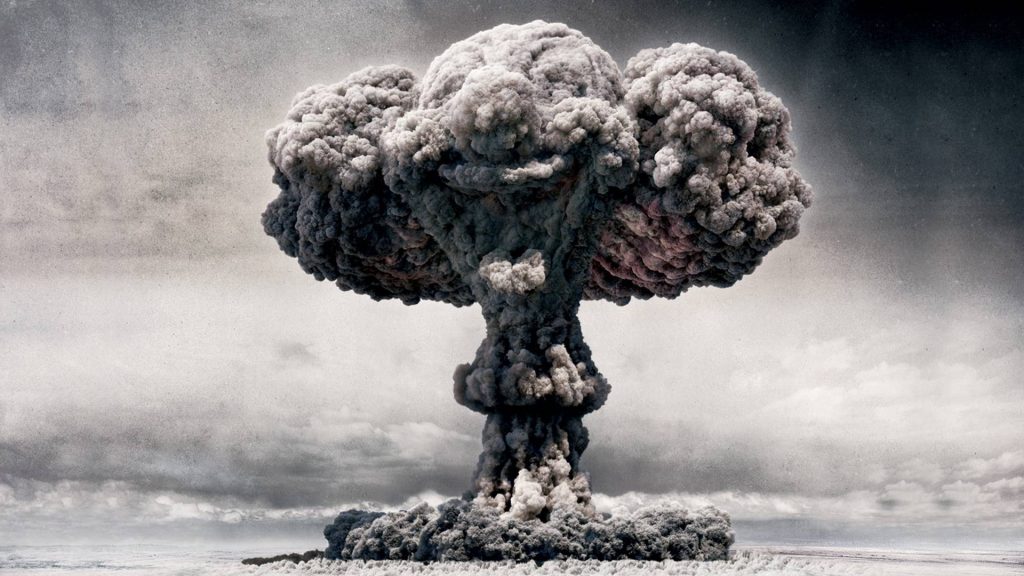 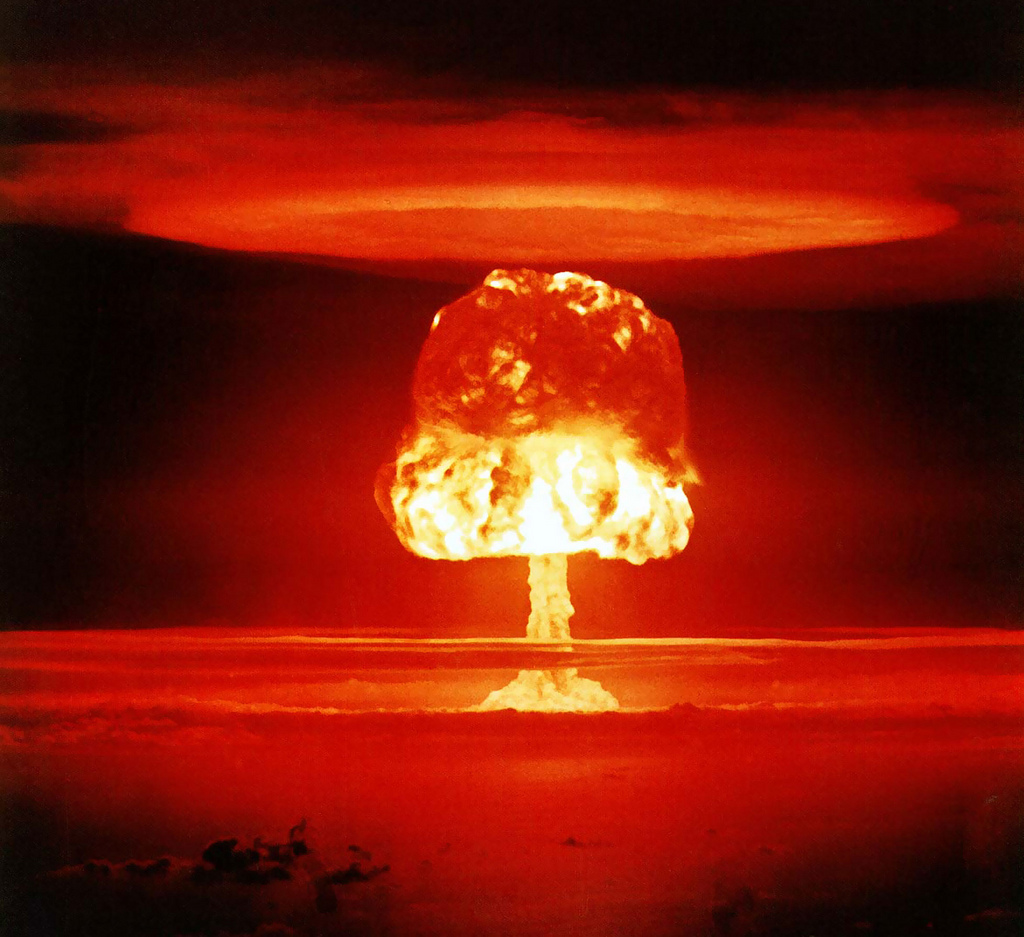 In the current context, the US is threatening to wage a preemptive nuclear war against Russia, which possesses a vast arsenal of nuclear weapons. Hillary Clinton has confirmed that “nukes are on the table” and she intends to use them if she becomes president. We need to defend ourselves against Russia, Iran, North Korea and China. Her solution is to blow up the planet.

If Hillary decides to wage a preemptive nuclear war on Russia, World War III would commence with mushroom clouds.

How would World War III end. Would it have an ending?

In the words of Fidel Castro, “the collateral damage” of a nuclear war in the present context would be humanity in its entirety.

The threat is real: the US contemplates waging war war on Russia, which is tantamount to waging war on the World.

“On August 9, 1945, Nagasaki was the target of the world’s second atomic bomb attack at 11:02 a.m., when the north of the city was destroyed and an estimated 40,000 people were killed by the bomb nicknamed ‘Fat Man.’ The death toll from the atomic bombing totalled 73,884, as well as another 74,909 injured, and another several hundred thousand diseased and dying due to fallout and other illness caused by radiation.”[2]

In the European Theatre, World War II ended in early May 1945 with the capitulation of Nazi Germany. The “Big Three” on the side of the victors – Great Britain, the United States, and the Soviet Union – now faced the complex problem of the postwar reorganization of Europe. The United States had entered the war rather late, in December 1941, and had only started to make a truly significant military contribution to the Allied victory over Germany with the landings in Normandy in June 1944, less than one year before the end of the hostilities. When the war against Germany ended, however, Washington sat firmly and confidently at the table of the victors, determined to achieve what might be called its “war aims.” 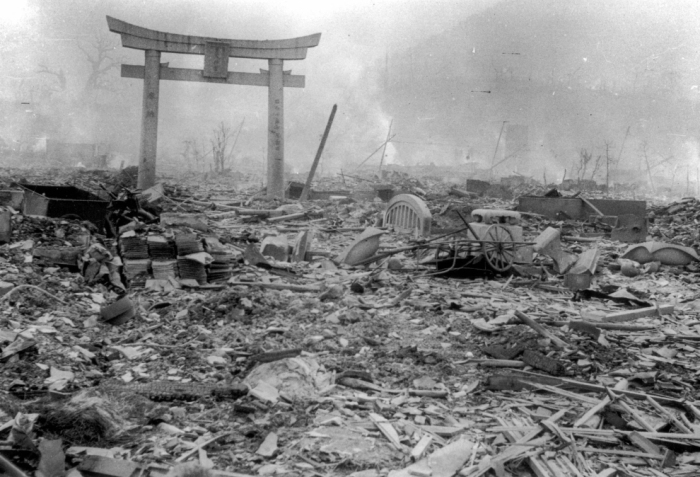 As the country that had made the biggest contribution and suffered by far the greatest losses in the conflict against the common Nazi enemy, the Soviet Union wanted major reparation payments from Germany and security against potential future aggression, in the form of the installation in Germany, Poland and other Eastern European countries of governments that would not be hostile to the Soviets, as had been the case before the war. Moscow also expected compensation for territorial losses suffered by the Soviet Union at the time of the Revolution and the Civil War, and finally, the Soviets expected that, with the terrible ordeal of the war behind them, they would be able to resume work on the project of constructing a socialist society. The American and British leaders knew these Soviet aims and had explicitly or implicitly recognized their legitimacy, for example at the conferences of the Big Three in Tehran and Yalta. That did not mean that Washington and London were enthusiastic about the fact that the Soviet Union was to reap these rewards for its war efforts; and there undoubtedly lurked a potential conflict with Washington’s own major objective, namely, the creation of an “open door” for US exports and investments in Western Europe, in defeated Germany, and also in Central and Eastern Europe, liberated by the Soviet Union. In any event, American political and industrial leaders – including Harry Truman, who succeeded Franklin D. Roosevelt as President in the spring of 1945 – had little understanding, and even less sympathy, for even the most basic expectations of the Soviets. These leaders abhorred the thought that the Soviet Union might receive considerable reparations from Germany, because such a bloodletting would eliminate Germany as a potentially extremely profitable market for US exports and investments. Instead, reparations would enable the Soviets to resume work, possibly successfully, on the project of a communist society, a “counter system” to the international capitalist system of which the USA had become the great champion. America’s political and economic elite was undoubtedly also keenly aware that German reparations to the Soviets implied that the German branch plants of US corporations such as Ford and GM, which had produced all sorts of weapons for the Nazis during the war (and made a lot of money in the process[3]) would have to produce for the benefit of the Soviets instead of continuing to enrich US owners and shareholders.

Negotiations among the Big Three would obviously never result in the withdrawal of the Red Army from Germany and Eastern Europe before the Soviet objectives of reparations and security would be at least partly achieved. However, on April 25, 1945, Truman learned that the US would soon dispose of a powerful new weapon, the atom bomb. Possession of this weapon opened up all sorts of previously unthinkable but extremely favorable perspectives, and it is hardly surprising that the new president and his advisors fell under the spell of what the renowned American historian William Appleman Williams has called a “vision of omnipotence.”[4] It certainly no longer appeared necessary to engage in difficult negotiations with the Soviets: thanks to the atom bomb, it would be possible to force Stalin, in spite of earlier agreements, to withdraw the Red Army from Germany and to deny him a say in the postwar affairs of that country, to install “pro-western” and even anti-Soviet regimes in Poland and elsewhere in Eastern Europe, and perhaps even to open up the Soviet Union itself to American investment capital as well as American political and economic influence, thus returning this communist heretic to the bosom of the universal capitalist church.

At the time of the German surrender in May 1945, the bomb was almost, but not quite, ready. Truman therefore stalled as long as possible before finally agreeing to attend a conference of the Big Three in Potsdam in the summer of 1945, where the fate of postwar Europe would be decided. The president had been informed that the bomb would likely be ready by then – ready, that is, to be used as “a hammer,” as he himself stated on one occasion, that he would wave “over the heads of those boys in the Kremlin.”[5]  At the Potsdam Conference, which lasted from July 17 to August 2, 1945, Truman did indeed receive the long-awaited message that the atom bomb had been tested successfully on July 16 in New Mexico. As of then, he no longer bothered to present proposals to Stalin, but instead made all sorts of demands; at the same time he rejected out of hand all proposals made by the Soviets, for example concerning German reparation payments, including reasonable proposals based on earlier inter-Allied agreements. Stalin failed to display the hoped-for willingness to capitulate, however, not even when Truman attempted to intimidate him by whispering ominously into his ear that America had acquired an incredible new weapon. The Soviet sphinx, who had certainly already been informed about the American atom bomb, listened in stony silence. Somewhat puzzled, Truman concluded that only an actual demonstration of the atomic bomb would persuade the Soviets to give way. Consequently, no general agreement could be achieved at Potsdam. In fact, little or nothing of substance was decided there. “The main result of the conference,” writes historian Gar Alperovitz, “was a series of decisions to disagree until the next meeting.”[6]

In the meantime the Japanese battled on in the Far East, even though their situation was totally hopeless. They were in fact prepared to surrender, but they insisted on a condition, namely, that Emperor Hirohito would be guaranteed immunity. This contravened the American demand for an unconditional capitulation. In spite of this it should have been possible to end the war on the basis of the Japanese proposal. In fact, the German surrender at Reims three months earlier had not been entirely unconditional. (The Americans had agreed to a German condition, namely, that the armistice would only go into effect after a delay of 45 hours, a delay that would allow as many German army units as possible to slip away from the eastern front in order to surrender to the Amer